Swords and weapons clash again with the announcement of Soul Calibur V — set to release tentatively in 2012.

While Street Fighter II has its hands firmly around the realm of fisticuffs, the Soul series from Namco Bandai has been a sharp force when it comes to the weapon-based one-on-one fighting scene, with none other than the original SoulCalibur as its most defining jem in the series.

Introducing a genius control feature that allowed players an unlimited range of movement never before seen in a 3D fighting game, SoulCalibur was a monster hit for the Sega Dreamcast back in 1998 and is today consistently considered as one of the best fighting games, if not plainly, one of the best games of all time. Interestingly enough, SoulCalibur did have an Arcade counterpart – although I won’t fault you if you don’t remember it – the Dreamcast version was light-years above the Arcade one in terms of graphics, game play, and content.

Now after trying its hand at adding special characters like Link from The Legend of Zelda in SoulCalibur II, role-playing game wrinkles in the single-player for SoulCalibur III, and a very deep character creation system in SoulCalibur IV – the series is back once more for its fifth iteration on the PlayStation 3 (its second on the Sony next gen platform.)

Announced recently at its “Step Up Dubai 2011” press event, Namco Bandai officially unsheathed SoulCalibur V (along with the neato little teaser trailer above.) Details about the next Project Soul developed title were scarce at the event, but what was learned is that SoulCalibur V takes place 17 years after the last SoulCalibur and introduces a flashy new combatant named Patroklos, who so happens to be the son of the Soul series featured heroine Sopithia. 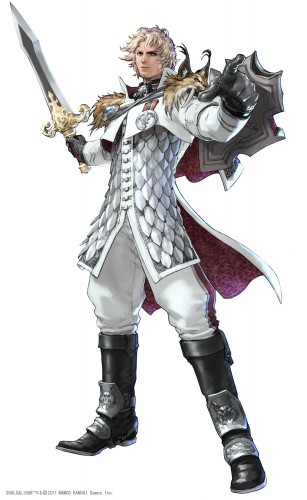 In a later Eurogamer interview with Hisaharu Tago, the Project Soul producer labeled SoulCalibur V as a “generational shift” which will feature some new characters and a “lighter, sharper, and more elegant” fighting engine that stays true to the series core game play but improves the pace and usability for newcomers.

For the rest of what SoulCalibur V might offer this time around, information on that won’t come until this year’s Electronic Entertainment Expo — so stay tuned further developments! With the PlayStation Network being down and a timeline of when it’ll be back and running still far off, its not like you got anything else to do!