The Aftermath Of The PlayStation Network Hacker Attack

What ramifications does Sony face after the online attack which took down the PlayStation Network — and what will happen in the days to come?

Sony’s current salesman pitch is “make.believe,” and the owners of the PlayStation brand will have to make their customers believe once again in their online infrastructure after it was brought down by hackers the last week of April; an attack which also lead to the theft of over thousands of user’s personal information.

The effect of PSN being down has been a legitimate disaster for the Japan-based electronics giant – with critical scrutiny by the press at large, several class action lawsuits against Sony in works, and calls for answers from the United States Congress. Ho-boy, if they’re involved you know things have gotten serious.

If anything the big lesson to be learned here, and one Sony is getting a full dose of right now, is that security is extremely important in this new online age – because as we’ve seen, there is an unruly mob comprised of unidentifiable persons that wish to do harm to the world wide web. If I can borrow a line from The Dark Knight: “Some men just want to watch the world burn.”

Thankfully, and my dumb gloomy-doomy thoughts aside, even after the fire manages to destroy all, you can still rebuild, and that’s what Sony has been reportedly doing during the PlayStation Network’s downtime. Bringing in high-level security pros, along with the F.B.I.’s help, Sony is working vigilantly around the clock to rebuild an online infrastructure that hopeful can stand up to the worst possible security breach. 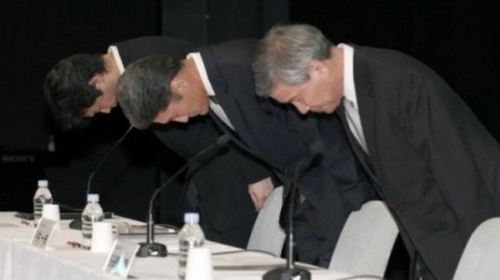 They’ve also planed a “welcome back” program (at a press event where the executives bowed and apologized in front a media full crowd) which will include free downloads of selected PlayStation content (most likely PS3 and PSP games,) 30 days of free PlayStation Plus for new and existing users, and for Qriocity members, 30 days of free services. Sony is also offering PSN users free identity theft protection for a whole year.

Will that be enough for people to believe in Sony and the PlayStation Network once again? An honest good question and one that we will have to see when online services hopefully start back up and are fully operation sometime around the time this article gets published.

Personally, knowing how full-well how this current consumer age acts, we might look back at this time and think what all the ruckus was truly all about (although I’m always up for eating crow!) I mean, look how fast Microsoft was able to bounce back from all those “Red Ring of Death” Xbox 360 issues they faced not so long ago. So right now all we can do is wait and see – again it hasn’t a really good week for Sony, what with the PlayStation Network down and the PSPgo ending production. Hopefully next month’s E3 will spark some positive buzz for Sony.