Namco Bandai invites the master assassin from Assassin’s Creed: Revelations to join the next Soulcalibur game, which now has a release date for 2012. 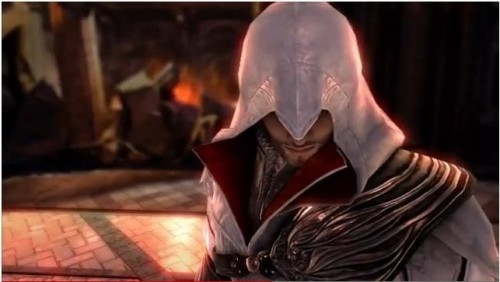 To be Ezio, or not to be Ezio — that is the question! … See that would of made for such a super cool introductory line if Namco Bandai hadn’t gone and already let the cat out the bag by making the rumors of Assassin’s Creed: Revelations protagonist, Ezio Auditore de Firenze, appearing in the upcoming Soulcalibur V true. Ah, biscuits.

Anywho, as I mentioned, Ezio in the next installment of Namco Bandai’s flagship sword-fighter is 100% official, extending the cast of weapon-carrying combatants to eighteen after the axe-wielding golem, Astaroth, and steel-clawed, Viola, were unveiled quite recently. Though that that amount certainly won’t be capped there for too long — as scuttlebutt of another new mysterious Soulcalibur V character has been circling the web.

We might not have any concrete info on that hot piece of gossip, but we can show you Ezio being introduced in the world of Soulcalibur V with a fine piece of footage provided by Namco Bandai themselves. Feast your eyes on this:

I like how they flipped the “A” in Assassin’s Creed to match the roman “V” in Soulcalibur V — I see what you did there Namco Bandai you cheeky monkeys you.

Oh and I also saw — and I’m sure you probably did too unless you where overwhelmed by the awesomeness that was seeing Ezio in action (if you need to go take a breather go for it, I’ll understand) — towards the end of the trailer, a January 31st, 2012 release date for the game in North America (Europe gets it on February 3.) Which is also official too, so get ready for a new year of epic showdowns and blazing-sword action in 2012, with Soulcalibur V.

While we’re on the subject of awesome trailers, I hope you saw the extended cut trailer for the game Ezio is naturally starring in come this November 15th, Assassin’s Creed: Revelations.