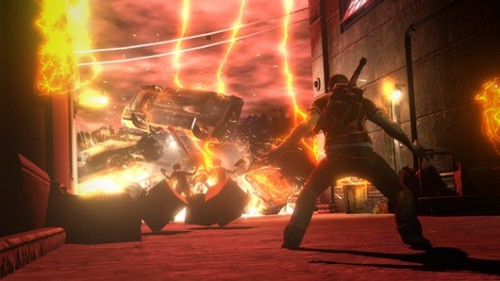 Joining the Sony Computer Entertainment family is Sucker Punch Productions, delightful makers of Sly Cooper and the current inFamous series, as the electronics giant bought the Bellevue, Washington based game studio for an undisclosed amount on Tuesday. What does this mean for both companies?

For Sony and their PlayStation brand, it’s adding one fine dandy of a developer this console generation to their already full cupboard of talented first-party studios. You might remember last year SCE scooped up U.K. based developer, and Little Big Planet creator, Media Molecule — expanding their gaming portfolio to potentially pristine heights.

Meanwhile for the happy gals and pals down at Sucker Punch Productions — it’s all about the financial security, baby! Sure you might lose a little bit of freedom, but if it means staying alive in a current economic climate, which we’ve seen time & time again snuff out even the brightest of blubs, then it’s for the best. Not that Sucker Punch will have anything to fear with their new Sony overlords, oh heck no.

If there’s one good thing to say about how SCE manages their studios worldwide, is that they leave them well enough on their own — in trusting them to make awesome games without having to get up all in their business and what not. Some might say though, that at times this bites Sony back where the sun don’t shine *cough* Grand Turismo 5 *cough,* but hey, you’ve got to respect it when a financial backer just lets the creative talent, be… you know, creative.

I’m pretty sure we wouldn’t have some of the more curve-ball kind of offerings, games like Journey from Thatgamecompany, on the PlayStation Network if not for this key principle. Something I’m really glad exists on the PlayStation ecosystem and I hope you do too.