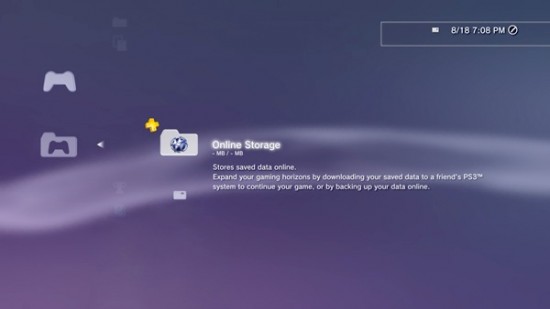 The latest firmware, software update 3.60, for the PlayStation 3 is up live for download, and aside from the head-scratching option of choosing the amount of time before a controller turns off after you’ve used it, the update also brings with it a sweet cloud-based game save service for members of the paid PlayStation Network subscription service PlayStation Plus.

Before some of you ask what a cloud is doing in your PlayStation 3 and slowly reach for an umbrella or a yellow raincoat; a cloud-based save service basically allows one to save data on a secured server via the internet and access it from any other device. In this instance with software update 3.60 (at least for PlayStation Plus subscribers,) game saves can be uploaded for back-up purposes and played from any PlayStation 3 console.

Up to 150MB of space (with a max of 1,000 saves) will be allotted to individual PlayStation Network accounts to store PlayStation 3 game save data, which also includes copy-prohibited files. The only small-print catch is that users can only restore deleted files once every 24 hours. Now, most PlayStation 3 games will work with the cloud-based service for game saves, and in the future, later titles will incorporate the ability to offer online storage as an option.

Finally, not noted in the description or Sony’s press release for the software 3.60 update is a beef-up of the security for the PlayStation 3 against hackers that have lately cracked open the console’s operating system. One hacker in particular, a creator of the PlayStation 3 jailbreak PSFreedom, claimed that Sony had found a way to plug up security holes with the recent update by removal of a certain system key.  This doesn’t mean that the PlayStation 3 isn’t protected from future exploits though, only that hackers will have to find another way to do so.

So be prepared to wait a while to play something on your PlayStation 3 (say like Ridge Racer Type 4 or perhaps PixelJunk Shooter 2) as it updates the firmware – your patience will be much rewarded.