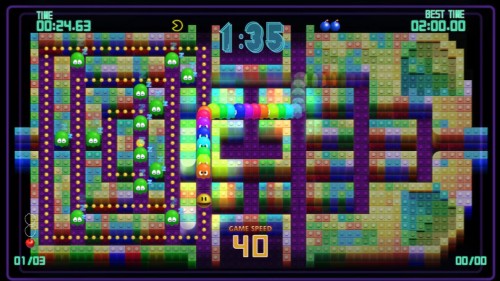 Today we live in a gaming era where the adage “everything old is new again” is not only true, it also prints money for any company willing to revive a retro title and give it a current gaming console whorl.

Set upon trippy rainbow visuals out of a House/Techno music dance rave (pacifiers and glow sticks not included,) Pac-Man Championship Edition uses the base Pac-Man fun of chomping down pellets and avoiding ghosts, but throws in a new overall goal to score the most points before either your time or lives run out.

As you gain more points in the game, the action becomes faster and crazier, and soon it almost becomes near impossible to escape entrapment by those pesky multi-colored ghosts. Championship Edition isn’t your Grandma’s sweet and slow Pac-Man – this version is a new breed of challenging, the kind that would eat your quarters faster than a broken arcade unit. 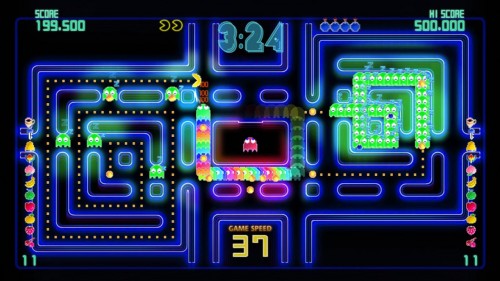 And with Championship Edition DX the challenge gets even freakier — with more than 100 new diverse and extreme mazes to explore and a new type of ghost that lies asleep until Pac-Man passes by them, you will certainly have your hands full. (Does Pac-Man even have hands?)

Thankfully, Pac-Man Championship Edition DX does give you some much needed new tools to stay alive a little bit longer – such as an endless supply of bombs that kicks back all the ghosts the center of the maze — but at a cost of points, so you’ll have to use them wisely and at the most necessary of moments.

Really to fully explain Pac-Man Championship Edition, it’s better left to see it in action — so check out this intro trailer from Namco Bandai. (Be warned though, you might lose your eye sight if you stare to long at the extreme colorful visuals. I’m not kidding.)

Pac-Man Championship Edition DX is what everyone loves about Pac-Man, but crazier and mind-numbingly fun to the point where you might lose track of time. Plus for only $9.99, the game is a steal when it drops on the PlayStation Network this November 23.

What else is hopping in the world of the PlayStation 3? Well, Gran Turismo 5 finally has a due date, and could this be the rumored PlayStation Phone? Click to find out!