Be one against a nation of the dead – a Dead Nation that is. That’s the name of the new zombie shooting game slowly creeping itself on to the PlayStation Network in November. 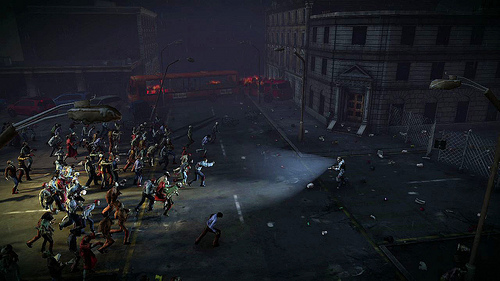 If ever there was a zombie apocalypse, I would hope that I would be able to gather enough courage to put up a good fight. Learn from the mistakes I’ve redundantly seen in the countless number of zombie flicks that my friends have victimized upon me, and then pick up a cricket bat and kick zombie butt as I make why to a safety zone.

But alas, I’m just a weak clumsy yellow-tailed geek, and I’m probably better off offering myself up as a zombie appetizer. *Sigh* Thank goodness then for the medium of video games, where even the lowly of persons can be all the zombie slaughterers they can be.

And one game you might want to check out is the upcoming Dead Nation for the PlayStation Network from developer Housemarque (who also made the widely popular Super Stardust HD.) 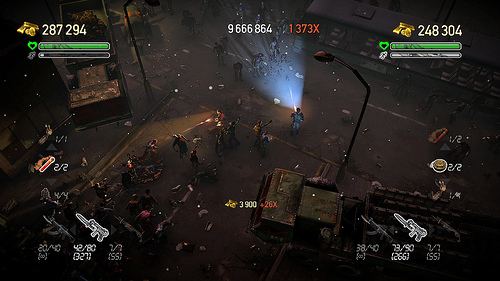 In Dead Nation, players are thrown into zombie infested areas and must use keen strategy, loot hoarding, and lots of ammo to survive. Oh and score a lot of points and kills before you reach each level’s end.

Killing zombies will reward players with score multipliers and sometimes gold (which can be found in loot chest across the field along with ammunition and armor pieces) that later can be used to upgrade weapons at weapon shops. And you’ll certainly need all the blasting power you can get when later levels throw out inconceivable hoards of zombies at you. 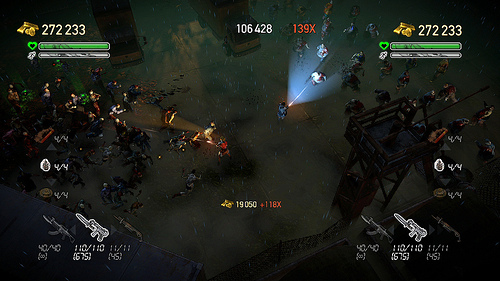 Dead Nation also has local and online multi-player so you and a buddy can tackle the difficult of zombie situations. Yet what’s surely is the most interesting aspect to the game, one defined by the scoring aspect of it, is the larger metagame that pits country against country in high score supremacy.

Every score and kill gets collected and sorted by country and then posted on the PlayStation Network – almost like a scoreboard – with the end result having each country ranked by who has purified the most zombies in their own region. (USA! USA! USA! USA!)

Dead Nation will be available November 30th on the PlayStation Network for $14.99, so get ready for all the zombie beat-downs you can shake a rotting corpse with!

PlayStation Network is crawling with some great things to download, like the Assassin’s Creed: Brotherhood DLC or the God of War Collection.