Microsoft Encouraging People to ‘Ditch Their PS3s’ for $100

As Xbox One sales trail behind the PS4 due to its more expensive price point, Microsoft are offering $100 store credit towards the console in exchange for PS3s. 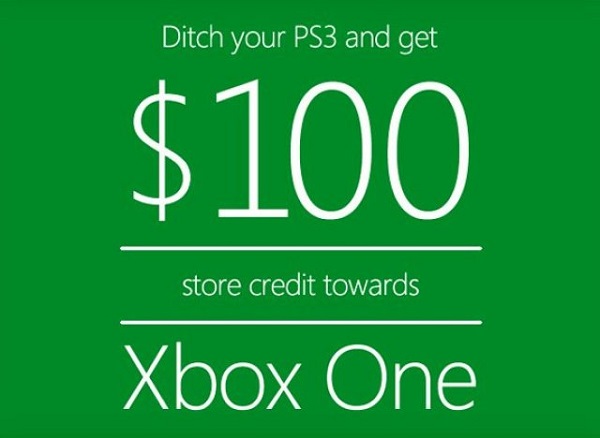 In perhaps one of the most peculiar headlines of the day, Microsoft are actually interested in getting their hands on plenty of Sony consoles. Rather than just go into cahoots with Sony and request a bulk shipment of PS3s (maybe they’d get a competitor discount?), the Xbox makers are actually offering store credit to existing PS3 owners in an effort to get them to ditch last-gen and board the neon green branded ship that is the Xbox One. Microsoft are said to be offering $100 worth of store credit towards their new console to close the gap between the PS4 and the Xbox One’s prices, in an effort to procure more early adopters via pseudo bribery rather than by marketing its useful features and, as they’ve pulled a stunt like this before, it suggests some interesting things about their business practices.

The biggest point of this store credit PS3 exchange is that Microsoft are massively under-pricing the value of a PS3. While the titles on Sony’s console may soon be available on PS4 via streaming, the past year saw some stellar titles released on the PS3, including the well-selling, well-reviewed zombie title, The Last of Us and realistic racing sim, Gran Turismo 6, that provide some very good reasons for players not to give up their Sony branded game boxes. Too, as has been pointed out around the web, PS3 owners might actually be better off shifting their PS3s on eBay or Amazon where they not only might be able to get more for their money (especially with games and accessories sold off too), this money would be able to go towards something other than an Xbox One, possibly even a PS4, which has so far been the leading console in sales.

This Microsoft deal, which runs through till March 2nd in the United States and Canada (North America, it’s worth nothing, is where the Xbox One has the biggest chance of surpassing the PS4 in sales) is somewhat similar to the deal that they put together when they were trying to shift Microsoft Surface tablets by offering store credit in exchange for iPads. Too, it also signals a company desperate to increase the console’s sales by any means, with Microsoft recently hitting the headlines as they appeared to pay YouTube users to post biased videos in favour of the Xbox One to promote the console. However, Microsoft’s plan, if successful, could turn out to improve sales as they had hoped, perhaps forcing Sony to evaluate Microsoft’s brand strength amongst consumers, so we’ll keep you posted once we know more.