Sony has announced that the popular Japanese shoot ’em up (SHMUP), Cho Aniki, will me making its way to the PlayStation 3 through the PlayStation Store’s new section called Imports. 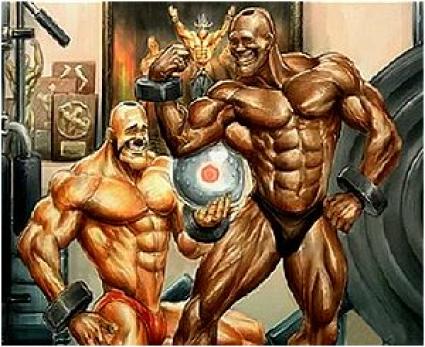 The recently founded MonkeyPaw Games, a company that specializes in the digital distribution of games that were never localized in the US, will handle the publishing.

The game coming to the PS3 is the original PlayStation version. For those who haven’t been introduced to the game, Cho Aniki (which means Super Big Brother), is a game in which players assume the roles of two muscle-bound men in Speedo-type underwear who fly around and shoot things.

The game is known for its sexual humor, but uses a lot of risque imagery to get its laughs across. Much of the content ventures into homoerotic, with lots of actions implied in not-so-subtle ways. Most will just shrug it off and laugh, seeing it as nothing more than a game that doesn’t take itself seriously. However, back when the game was originally released, publishers in the US were afraid to take the financial risk on what they viewed as such an obscure title.

Thanks to digital distribution, the game is now easy to import to North America, because there is no longer the need for discs, shipping, packaging, shelf space or any of the other expenses that come with a retail release. Because the game seemed taboo to North American publishers back then, it’s also had a chance to gain a cult following. When the game releases later this month, there is no doubt that some will be willing to shell out the 10 or 15 bucks it will probably cost to buy the game.

With the new release the game is sure to bring new fans to the series, if anything for its campy style. Most of us North American gamers have never played the game, so on September 21, we will know if the wait was worth it.

For now, prepare yourself for PlayStation Move, or bring on the October cheer early, with these awesome PlayStation-themed pumpkins.