Coming back to the PlayStation Network December 14 to once again save humanity from the Brotherhood of Evil Mutants, are those uncanny X-Men in the memorable arcade game made by Konami – X-Men Arcade. 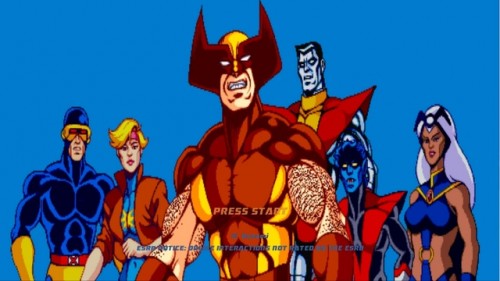 Happy news to gamers who like the following items: A) Classic arcade games. B) Arcade beat ‘em ups. C) Games with pretty bad Japanese-to-English translations. D) Marvel’s X-Men. And lastly, E) All of the above.

Konami is dusting off one of its most fan-cherished productions, which if you are over a certain age (around mid twenties) will surely remember from those late afternoon trips to Pizza Hut. That game being X-Men Arcade – arriving December 14 on the PlayStation Network.

Produced in 1992, X-Men Arcade is a 2D side-scrolling beat ‘em up arcade game featuring the team of extraordinary-powered humans, a.k.a. mutants, called the X-Men, as they try to stop the villainous mutant Magneto, and his evil cohorts, from doing things bad guys in comics usually do – cause mass destruction, world domination, all that jazz.

Now as far as beat ‘em up games go, X-Men Arcade is pretty standard stuff: beat wave after wave of baddies using a simple set of attacks to bring them down, then reach the end-level boss and beat him too – do this a sequential number of times, and game over.

Boring you say? Only to the ill informed. For fans of the genre (myself included) there’s something rudimentary satisfying about kicking the crap out of anything in your avatars path in this kind of virtual presentation. Which is what you’ll be doing a lot of in X-Men Arcade — thankfully modern advances such as unlimited continues have greatly leveled the battlefield.

And as for other technical triumphs of today, Konami is adding six player drop-in/drop out online (also available in offline mode) to the PSN version of the game. Sounds to me like an awesome get-together plan for friends.

X-Men Arcade will also feature the usual current gen console details like leaderboards and trophies, but aside from that, the game will be a faithful port of the arcade version by Backbone Entertainment (Super Street Fighter II Turbo HD Remix, Sonic’s Ultimate Genesis Collection.)

This means you can sit back and enjoy the untouched, yet broken and unintentionally hilarious English script — with vocal lines such as: “WELCOME TO DIE!” “NOTHING CAN MOVE THE BLOB!” “I AM MAGNETO, MASTER OF MAGNET” – or my personal favorite – “I’LL KILL YOU, X-CHICKEN!”

If you don’t mind a cool game purchase, partly on nostalgia, then pick up and enjoy Konami’s X-Men Arcade on December 14 through the PlayStation Network, for $9.99.

And after splurging on this, how about some beat ’em up seconds with Scott Pilgrim vs. the World and it’s new DLC, or if your in the mood for some zombie smashing fun, and who isn’t, then check out the downloadable over-head zombie shooter Dead Nation.