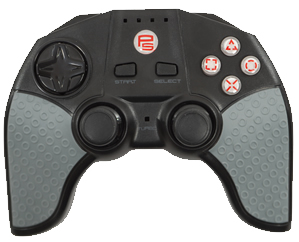 Dual Shock 3 and SIXAXIS are quite passé these days and though there is this comfort level associated with Dual Shock 3s, Datel’s Wildfire launch comes as a pleasant surprise. It is a generic controller but has standard PS3 features and much more. It comes with cool and futuristic features like tilt sensitivity, Bluetooth and vibration.

Thanks to the tilt sensitivity, controlling games, especially racing games could never have been easier! Vibration would certainly add to the tactile perception of the gameplay, which is quite important. The design is pretty cool too, but the usage of 2 AA batteries kills all the enthusiasm. The Wildfire costs $50 and can be bought at various places.

The controller looks a little drab, in my opinion. Though it comes with a number of futuristic features, the design as anything but futuristic. In fact it looks quite dull to me, and also the 2 AA batteries could have been avoided. I guess, we can’t have the cake and eat it as well! You must also try reading about the Arcade PS3 Controller which is a sure shot answer to all your arcade needs. The XCM Dominator PS3 Controller has its own charm and looks quite snazzy.