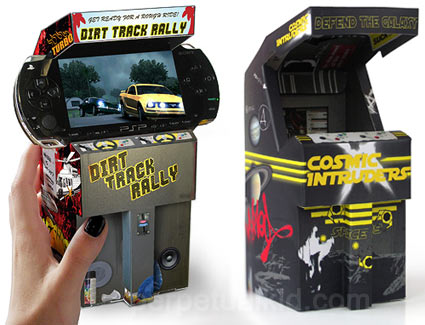 Cardboard Mini Arcade is a throwback to the era of old school arcade games when we as kids played them feverishly. The funky device is a case to hold your PSP and is authentic in every tiny way and each little detail has been replicated.

The flat pack cardboard which has been used to create this case is adorned with stickers and wrappers so that they look as original and authentic as possible. The cardboard replica comes with graffiti printed all around it which makes you feel like you are back in the eighties. The retro graphics and old skool suggestive text “Dirt Track Rally”, “Cosmic Intruders” and others make arcade fans all teary eyed when they treasure their modern PSPs in this case.

The cardboard arcade box costs $15.99 and is a cool way to impress all those annoying wannabes who think they are old skool by playing Street Fighter II or III. In my opinion, this is a perfect gift to anyone who has seen the light of the day during the eights or even early nineties. If you were looking for a PSP stand, you could try and check out the Snake PSP Stand Kit which is not as weird as it sounds, and is quite useful in fact.