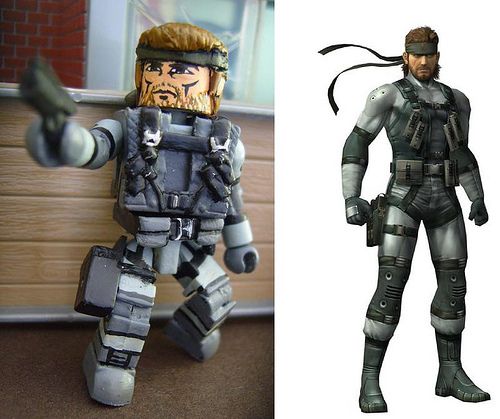 Solid Snake is one of those characters that you either love or hate, kind of like the Marlboro man. The game Metal Gear Solid has presented Snake throughout many years, sequels, graphics upgrades and situations, and after all these years…he is still as bad ass as ever.

Graham Higson has taken the Snake character and made another interpretation of it as a Minimate figure that is hand painted and really gives Snake another style. I for one would never be able to create such artwork, but some really know what they are doing.

I asked Graham about his inspiration for this Metal Gear Solid figure and what it involved, and he explained:

I’d never really been aware of MGS, but liked the cool character design when I was asked to make the commission. It’s made from a Battlestar Galactica pilot Minimate, with a modified chestpiece and belt, and a fully sculpted hairpiece. It took around two hours, with the longest part being the face. It’s 100% hand painted, I don’t use decals.

Whatever was done, I respect, for Snake still looks hard as hell, with the cheekbones, facial expression and haircut completely intact.It is great to see such artwork, especially of Solid Snake. If he is a character you admire as well, then check out the Solid Snake Stitch Art and even the real sized Metal Gear Solid Lego Gun.

Great Job Graham! Thanks for the image and information.