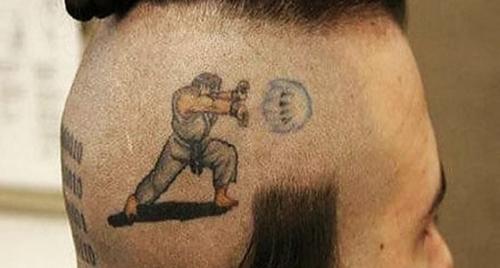 While we all know how cool the Hadouken move is on the Street Fighter series, many of the fans take it a little too seriously, as we found out. This guy in the picture has a Hadouken move tattooed on his scalp and seems to have a Mohawk hairstyle to appear cooler. However, it is a little funny that he had to mean ‘Hairdouken’ in order to seem or sound eloquent.

While the guy plays with the word on his skull in the form of a tattoo, I bet the surge of spiritual energy is directed nowhere and is wasted, in this guy’s case. According to the Japanese, the head is where all the spiritual energy is stored and if one had to deliver Ryu’s Hadouken to someone’s head, it wouldn’t be holy anymore. In my opinion, it would have looked better if he had the Street Fighter move tattooed elsewhere instead of the skull, to avoid the obvious pun he intends.

Ryu certainly wouldn’t like the way he has been printed on the head. You could check out other interesting Street Fighter 4 Moves we have featured earlier. If you are not happy with that list, you could also check out what we wrote about the Street Fighter 4 Unlocking Moves. Ryu would be proud of you if you delivered a hadouken to a baddie (or a good guy, depending on how you see it) in real life.