Whoever said video games make you play it all “in a box”? Questioning this basic assumption of people that video games limit your experience of the real, Alfredo Tejeda has created two cool conceptual posters to promote the PSFour concept. The PS4 concept may not even be ready as a product or even as an idea, but the promotional posters by Alfredo certainly seem to allow us to imagine a lot about it. 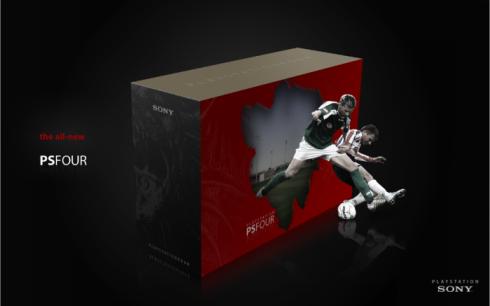 The poster hardly has any copy in it, and mostly has a great visual element to it. The first poster gently asserts “the all new PSFour” and next to it the PSFour box is ripped off by the reality of football players kicking through it. The idea seems to stress the fact that the new version of the PlayStation console would be so realistic that you would no longer feel that a game is trapped “in a box”.

Similarly, the second poster features Dhalsim from Street Fighter who burns his way through the box, to deliver the kind of action which would make you feel that it is all happening for real. Stressing the importance and expectations of video game fans for a greater level of real-feel, Alfredo has certainly created two amazing promotional posters for the PSFour.  You could also check out the PS4 Design and the PS4 Controller which we had written about earlier. Those looked good too!