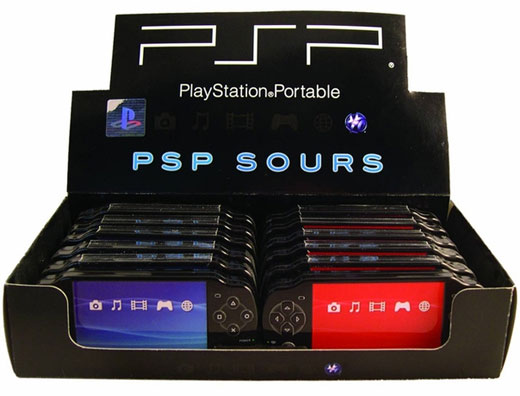 How would you like it if you could munch on your PSP when you are hungry? Well, the idea may seem zany but there are these officially licensed PSP candies which are packed in a metal tin which resembles the PlayStation Portable. Don’t even think about playing with these portable consoles unless you like to play with what you put in your mouth.

These candies are made from sugar, glucose, gum arabic, and other such emulsifiers to make your candies tasty and preservable; sour and tangy. You could choose between blue raspberry and the sour cherry which resemble the red and blue screens of Sony PlayStation Portable. However, these candies are quite expensive and for a dozen of these candies, you may have to shell out almost $32.

If you are totally into PSP and can’t have enough it, “fill your stomach with it”, seems to be the mantra. However, it beats me that these candies are expected to be sour. Shouldn’t they be sweet? Well, it doesn’t matter as long as they will not just restrict themselves to licensing PlayStation Portable candies and also do think about the New PSP 2 and make the launch of it a reality as soon as possible.