If you are a regular user of PS3 and would require something more comfortable to wear around your ears, you should choose the Mad Catz Bluetooth Headset for the PS3. It allows you to play with the PS3 hands-free and communication becomes extra easy. It is designed in a manner that makes it very convenient to be used and it is light enough to not give you headaches while wearing. 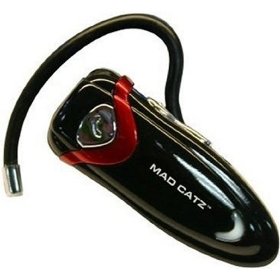 You would no more hear that annoying echo or that noise as it comes with noise filters and echo eliminators. It also maintains awesome audio quality during online gaming sessions. When chatting with gamers, you can make sure that undesirable sounds can be muted out in order to maintain privacy. Apart from the PS3, it can also be used with cellphones, PDAs, computers and other such products. It comes in many colors and has a range of about 30 feet.

The Mad Catz Bluetooth Headset for the PS3 supports Bluetooth V1.2 and higher and is specifically designed for v2.0. The cool headset costs $40.49 after a heavy discount. I would say, go grab it while you still can, as later you might not be able to find it in stock. It is truly amazing that Mad Catz (Lawrence Young) was able to develop such a cool headset. He has also designed an entire collection of PS3 Controllers which is not to be missed. You could also take a look at Mad Catz Street Fighter 4 PS3 Controllers.