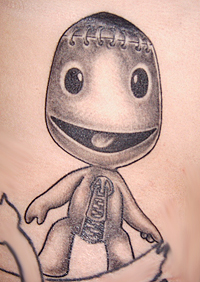 I know that Little Big Planet Costumes, Sackboy and the PS3 as a whole are extremely popular and gamers from all around flock to them like crazy but a Sackboy Tattoo? now that is both courageous and insane.

This Sackboy Tattoo from Strumpfkunst is as cute as the Sackboy character we cannot get enough from, and it demonstrates that gamers have for their favorite characters and video games. It may be small, but it is not something that just washes off in the morning.

Well, congratulation to the LBP fan that actually took the first step toward being a fanatic, but I hope more will come. If any of you were hoping to get some Sackboy tattoos of your own and need some inspiration and ideas, you can check out the two collection we features before: Little Big Planet Costumes Video and the Sackboy Costume Images.