New PlayStation Home Theater Development in the US 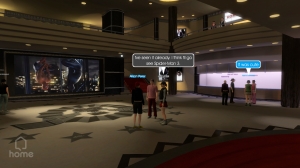 If you had been wondering what is happening in the PlayStation Network (PSN) apart from the usual title releases and mods, there apparently shall soon be a major overhaul of the existing US PlayStation Home. US PlayStation Home will soon be getting theaters which are more interactive and sophisticated in the near future.

CydoniaX revealed that the new theater shall have a 10-screen facility and also interactive rooms. This means it is not going to be just the video screens. There also is going to be some ‘awesome content’ which may suggest premium features.

An issue with interactive rooms is that you may not be able to discuss anything about what is being played, as the video begins personally for each person as he or she enters. Hence, when you try and comment on the video being played, the other person may seem out of sync. Nevertheless it is an exciting proposition but we are warned that it may take a ‘bit longer’. PlayStation Network is certainly abuzz with activity and we had recently heard the rumor about a New PSP 2.