Thought to be retired, the VP of everything down at el rancho PlayStation 3 is staring a new ad campaign called Long Live Play. 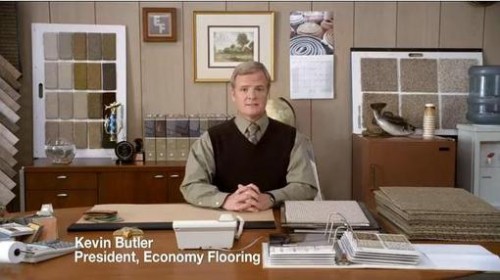 As they say, don’t believe the hype. Which much of was over the surprising resignation of Kevin Butler, the dynamic Vice-President and face of many PlayStation 3 commercials. On his Twitter account, @TheKevinButler, Mr. Butler made the shocking announcement that he would be quitting the company and become President of the family flooring business.

“TheKevinButler: A man can only be made VP so many times, KB’s off to be PRESIDENT of my uncle’s new upstart company.”

It was giant news that instantly floored the PlayStation Nation and yours truly — yet something felt slightly amiss, especially since soon after Mr. Butler’s tweet, Sony told the website Industry Gamers to “stay tuned” and to keep following the former VP’s Twitter feed. A clever ruse it had to all be, and today it was certain, as Sony released a new video showcasing its new ad campaign along with a familiar face.

Why none other than Kevin Butler himself. Proudly back to ditch the long-running (and endlessly mocked) motto of “It Only Does Everything” with a new phrase, “Long Live Play,” that presumably we be drilled into our skulls (in a good way, right?) at every press event and commercial from here on out.

I for one welcome back Mr. Butler and his no-nonsense gaming virtues that will lead the PlayStation brand forward. And with such fine games like Uncharted 3: Drake’s Deception and PixelJunk SideScroller — it’s shaping up to be a good future, indeed.

Now if only someone would try to find out what ever happened to that Marcus “PSP” kid, he’s been missing since like forever. Almost like he was never real in the first place… so creepy.