The new Uncharted 3: Drake’s Deception trailer from Gamescom 2011 is here — and yes, it’s just that good. Check it out! 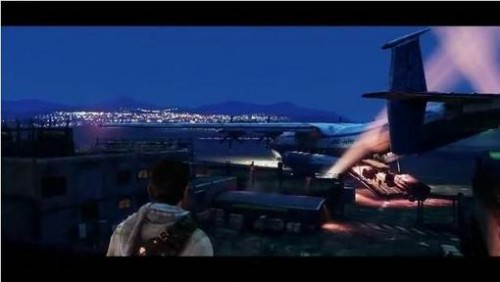 *Bing* Hello, ladies and gentleman of Ps3Maven flight 8-18-12, this is your Captain speaking. Just want to happily  inform you of today’s inflight movie, a real special treat from Naughty Dog studios that won’t fully be released until November.

It’s a new trailer from Uncharted 3: Drake’s Deception from Gamescom 2011. The PlayStation 3 exclusive is… well really, what does needs to said that hasn’t been said before, other than it still looks smashing-good from all the media and press events (such as the one at Comic Con) the game has been featured in.

As for this snippet of footage, the Gamescom trailer shows off that wily wolf of  a treasure hunter Nathan Drake, at an undisclosed airport of sorts, trading blows and bullets with enemies, in usual epic cinematic-style. While topping it all off, trying to catch an air craft in the only way Drake knows how to — please don’t try that at home folks.

I hope you enjoyed that trailer as much as I did …Not that I should have, because I’m totally suppose to be flying this plane right now… uhh… oh look flying saucer on your left! Anyway, thanks for flying Ps3Maven — your safe and friendly Internet transportation service!