What is Sackboy Made of?

If you thought Sackboy was just too cute and all fluffy inside, toy designer Jason Freeney thinks otherwise. In a series of illustrations, he has deconstructed Sackboy as we know him and has revealed a more human side to the cute character.

Jason has unzipped Sackboy to reveal bones, flesh, organs, blood, and male genitalia. Most people seem to be having a problem with Sackboy’s bits and pieces and have not been able to accept that there could be a possibility of him being a shadow of the human body. 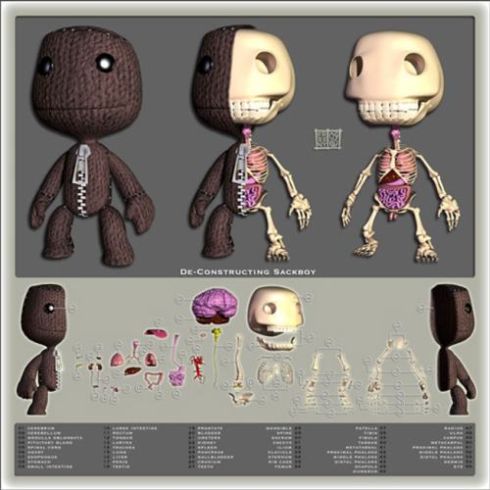 The refusal and disappointment with the revelation of Sackboy’s innards reflects our attitude towards our own bodies and the way we refuse to acknowledge biological functions. It really doesn’t matter if you are squeamish about seeing Sackboy’s bits and innards but one thing is for sure; it is just an artist’s impression and perception which according to me is quite smart and intelligent!

Perhaps we shall soon see a Sackgirl with female genitalia as well in the near future as the present illustrations may be seen as sexist. If you are still not comfortable with these illustrations, try the Spock Sackboy which is quite funny and also the Sackgirl Crochet Doll which looks beautiful.