A director’s cut of one of 2010’s head-turning games for the PlayStation 3 is coming out this month with some pretty sweet extras. 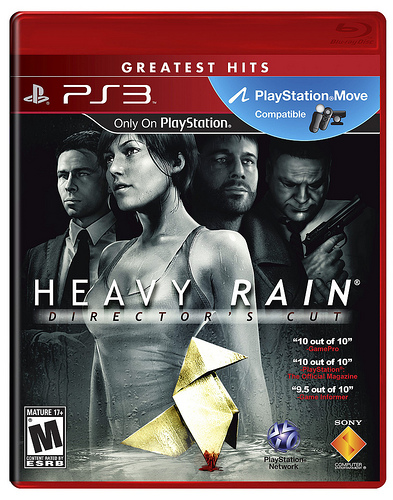 If there’s one videogame I can think of that rightly deserves the director’s cut treatment like so many of Hollywood’s big-screen creations, it’s last year’s Heavy Rain, a 2010 PlayStation 3 exclusive so film-like in all appearances because of it’s influences soaked thoroughly in themes of film noir and classic thrillers, the kind that would surely flow from of the mind of the late, great Albert Hitchcock!

Alright, alright — maybe that’s selling it a little too hard (seriously, nothing can come close to Hitchcock, duh!), but gosh darn it… Heavy Rain is an involving suspenseful experience you can’t have anywhere else but on a gaming system and more people should play it. Especially when coming soon on November 8th, pretty close I know, Sony will be release said director’s cut version of the game that adds some neat touches to the overall product.

The Heavy Rain: Director’s Cut, priced comfortable at $29.99, contains previously sold downloadable content (The Taxidermist DLC in case you’re wondering), deleted scenes from the game, a soundtrack CD featuring the music of award-winning film & television composer, Normand Corbeil, and oh so more that I decided to make a simple bullet-point list so you can easily see everything that comes with your purchase. No-no, thanks not needed.

Guess what also? Because Sony is being so generous with their Heavy Rain love (can you feel it?!), they will also be making the Heavy Rain Crime Scene Dynamic Theme available for free through the PlayStation Network for everyone, a nice gesture indeed. Free like like the Spec II patch for Gran Turismo 5 that recently rolled out along with new retail DLC.