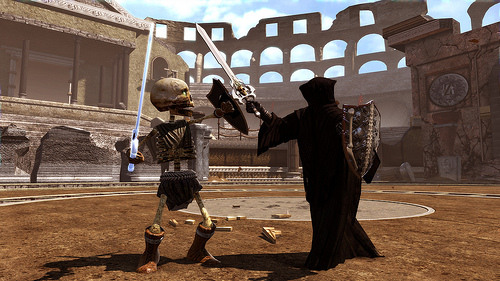 What a terrible night to have a curse – that night being last Tuesday, October 5th, when a spooky batch of downloadable content launched for the PlayStation exclusive sports game Sports Champions, one of the first group of games that require the PlayStation Move controller in order to play it.

Sports Champions is also a game that looks a tad too similar to another motion-controlled sports mini-games collection title from a rival video game company. For console fanboy war reasons, I won’t mention in this post who or what I’m referencing… but all I can say is that it rhymes with “Bii Bports.” (Whew, no one will ever be able solve that!)

Speaking of digitally provoked fear, the brand new downloadable content for Sports Champions, entitled the Haunted Pack (of course,) is highly creepy in its own right. For 5 ($4.99US) PlayStation Network space bucks, you can get a frightful taste of what the afterlife is like by playing sports events with the Grim Reaper and his buddies.

The Haunted Pack includes three new ghoulish characters which are playable in all six sports events in Sports Champions; a Grim Reaper-ish like character called “Specter,” and two spooky skeletons, one dressed in a Roman soldier’s armor named “Deadmund,” the other “Numbskull.” (Haha, I get it!) 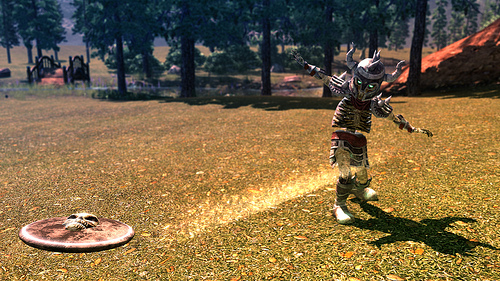 Plus you can’t have Halloween festivities with out throwing in some freaky accessories to give it that full-moon bone-chilling tone. The Haunting DLC will also have new spooky equipment for each of the sports, like a Phantom Disc Set to scare away your opponents in Disc Golf.

Just think of the Haunted Pack downloadable content as a way to burn off all of those added-on calories from wolfing out on a bag full of Halloween trick-or-treat candy.

Other activities that can help you burn calories (not really) are checking outing what else is here on Ps3 Maven – like this cool PlayStation Move submachine gun accessory, or again for the Halloween spirit, these ghoulish fan-made pumpkin carvings.

Via: The PlayStation Blog