Watch an eight minute walkthrough for one of the most talked about PlayStation Vita games from Tokyo Game Show 2011. 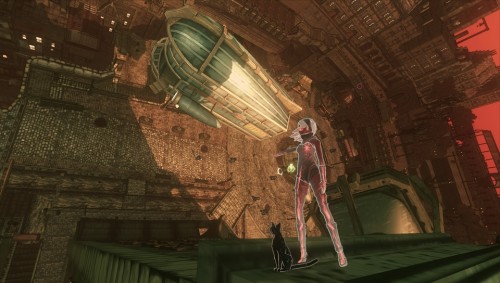 Handheld ports of console favorites like Uncharted & Metal Gear Solid are nice, don’t get me wrong folks. But for the PlayStation Vita (coming out to Japan this December) to escape the doom & gloom shadows of its precursor, Sony, in all its developing superpowers, must create worthy original content that will bring in potential buyers like bees to honey.

From early previews from Tokyo Game Show 2011, it seems that one such game has the potential to cut through the clouds and become that bright new starlet, an original game developed internally at Sony Computer Entertainment Japan Studios called tentatively Gravity Daze. The name sounds a little hookey, I’ll give that up, but don’t let that mark your first impressions — you wouldn’t want to kick yourself if you missed out on something so beautiful and potentially fun looking.

In the video you’re about to see directly below, the director of Gravity Daze will take you on a eight plus minute developer walkthrough that highlights the game’s story and features. Importantly, the core mechanics that rely on the PlayStation Vita’s gyro-sensors and dual-analog sticks to control the game’s young female protagonist, Gravity Kitten.

The director of this game I should point out is Keiichiro Toyama, best known in other circles as the creator of the big hit survival horror video game, Silent Hill. Truthfully, Gravity Daze is flat-out new ground for the Japanese game creator. But with the way this Vita title is setting up, it could be his next career defining workpiece. Not just for him though, but possibly for the system it’s hosted on.