Sony’s E3 2014 press conference is over but with the PlayStation makers showing off so much footage and new things you’ll need this post to get you up to speed. 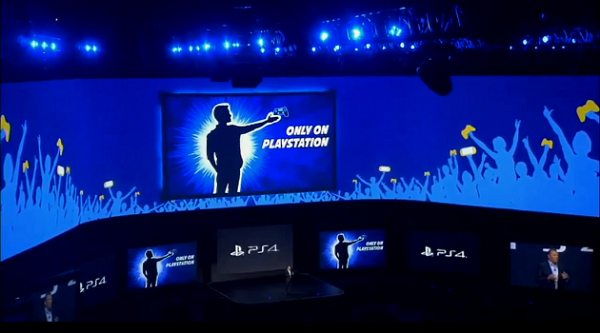 E3 is simply the biggest gaming event of the year. From the mega announcements of E3 2013 in which we got to see the PS4 and the Xbox One, to the years in between in which we get to see the phenomenal new games that we’ll be able to spend our freetime playing. Each year dozens upon dozens of announcements occur at the show, with the halls of the LA convention centre, as well as the various other stadia in Los Angeles (sports arenas this year were rented out to accommodate press conference attendees) becoming home to the biggest reveals in the games industry. Of the publishers and games console makers, EA, Ubisoft, Microsoft, Nintendo and Sony are the ones with the most to show and with the latter’s press conference the last to take place, we’ve got all of the exciting stuff from Sony’s presser for you right here.

An almost entirely unexpected reveal, Sony CEO Andrew House took to the stage to reveal that later this year, a “glacier white” model of the PS4 will be released, complete with a white DualShock 4 controller to match. Set to be released on September 7th, the white PS4 will coincide with the release date of Bungie’s MMO first person shooter and it’ll be bundled with a copy of the game as a result. Not only that but it will even come with a 30 day PlayStation Plus subscription with said sub being needed to play Destiny online.

The white PS4/Destiny bundle will be priced at $449 in North America and 439 Euros in Europe.

The Destiny announcements at Sony’s E3 2014 press conference didn’t end there either as a huge part in the puzzle piece of the Bungie/Sony partnership is the Destiny beta. The Destiny beta will be available on PS3 and PS4 to give PlayStation gamers a chance to access a large amount of the game’s features (as well as to do some much needed stress testing on the persistently connected title’s servers) before anyone else.

Sony were understandably pretty chuffed to reveal that the Destiny beta would go live on July 17th but Andrew House had a smile on his face too as he told the crowd that Destiny on PlayStation would even get some exclusive launch content too, including both weapons and mission content.

Heard of LittleBigPlanet anyone? Of course you have because the Media Molecule made series is one of the PlayStation brand’s most notable franchises. It’s no wonder as the series’ protagonist Sackboy became the PS3’s unofficial mascot.

LBP has been on PS3, PSP and PS Vita so it makes sense that the series build-it-yourself gameplay is making a PS4 debut with LittleBigPlanet 3. The big feature in Media Molecule’s next LBP game is Sackboy’s friends, each with their own special abilities. Media Molecule did show off a bit of gameplay (which you can view above) and they even gave a demo which both wowed and amused viewers so we can expect to be just as excited for the game when it launches in holiday season 2014.

When the PS3 launched, it was a huge disappointment for many that the console wouldn’t launch with backwards compatibility. For years we’d enjoyed backwards compatibility of PS1 games on the PS2 and even the PS Vita allowed us to play previously downloaded PSP games. It was a double disappointment when the PS4 wouldn’t be able to play PS3 games either but PlayStation Now looks to solve that.

Having been in a closed beta up until now, Sony have said that they will make the PlayStation Now beta available to North American PS4 users from July 31st, which will see them stream PS3 games from Sony servers and therefore give them access to even more great PlayStation games.

Perhaps even more than LittleBigPlanet, the Uncharted series from Naughty Dog has been a huge system seller for Sony for years. The series, helmed by protagonist Nathan Drake, brought third person action adventuring and huge, bombastic set pieces in 3 games on PS3, with another slated for PS4. We now know that the fourth Uncharted game will be called Uncharted 4: A Thief’s End, with that suffix suggesting that the ‘thief’ in the title refers to Nathan Drake and that this will be where his story ends. The trailer that Sony showed was all CGI though and the story isn’t completely clear so i wouldn’t expect this one to be released before the end of the year.

Previously launched in Japan as ‘PlayStation Vita TV’, the budget device connects to a TV via a HDMI cable allowing users to play hundreds of PS Vita titles without having to own the PS Vita handheld console too. Not just that but the device could also allow PS4 players to display a game on multiple television screens, perhaps allowing for LAN multiplayer when you don’t want your real life opponent looking at your screen.

PS Vita TV will be released in North American and Europe as hoped for, only this time around it will be called PlayStation TV. The rebranded box seems to offers all of the features that the Japan iteration did and it will be available for $99 in North America in Autumn.