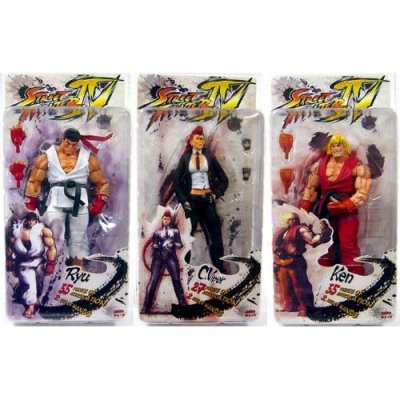 Street Fighter IV has given rise to so many speculations that the entire gaming world has been waiting for accessories, mods, and what not! The latest is the Street Fighter IV NECA set, which looks attractive enough for any gamer to give up his life for one of these.

The set includes 3 different models of figures and all are related to the game. No one could complain about their attractiveness or their visual appeal. The  selective action figures come in three different styles and they include the Ryu, Ken, and the C. Viper. These figurines could be an addition to your gaming art collection.

Looks like Street Fighter IV fans will definitely have a gala time checking out all the awesome figures and figures made available by TexasToysandComics. At $42.95, the figures are not only affordable but worth every penny spent if you are a real Street Fighter IV fan. The figurines can be used by anyone above age three and is a sure way of entertaining the child in you.