As part of its ‘Summer Blast’ promotion, the PS Store is offering tons of sales and discounts on PlayStation games. We’ve rounded up the best ones for you here. 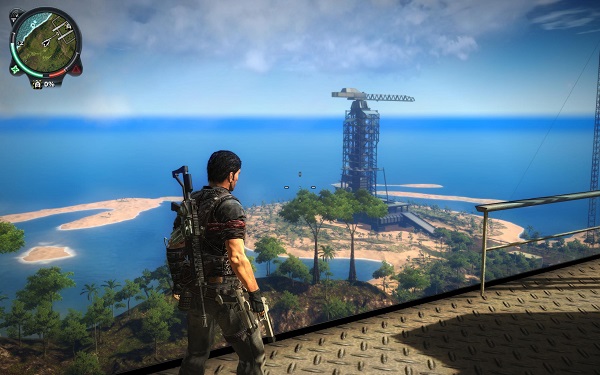 What are the typical ways for celebrating Summer? Maybe grab an ice cream? Work on your tan perhaps? For most, that’s exactly how they’re going to make the most of the scorching Summer heat that’s taking over the Northern Hemisphere at the moment. But for gamers, a much better option awaits indoors as Sony are giving us a good reason to stay inside with their ‘Summer Blast’ sale, offering up a hefty amount of discounts on games and movies. Check out the best of the bargains here, with this handy round-up.

If you’re going to spend your Summer inside, playing video games, then why not get a taste of the tropical way of life anyway? That’s what’s on offer here with Just Cause 2, as you play a fearless mercenary and anti-establishment fighter Rico Rodriguez as he lands on the island of Panau with the aim to rescue an inside man who may have gone rogue. Rico does this in the only way he knows how, by wielding guns and a parachute as he traverses the huge open world location attempting to cause chaos for the dictatorship that rules the land. Take on missions as you please, or just mess around till your heart’s content as you help the inhabitants take back their home. It’s on the PS Store for $9.99 ($7.99 for PS Plus members) until July 15th.

The PS Summer Blast isn’t just offering up games, it has a whole host of critically acclaimed movies on sale too. The first of two on this list is Up, a heart-warming and genuinely funny tear-jerker about an old man, a young boy and a lifelong dream. And, in typical Disney style, there’s also a talking dog. This animated caper will take you across the globe into the wilderness, showing you some of the most incredible visuals seen in any of Disney’s titles. If that doesn’t convince you, it’s worth noting that Up also won two Oscars (Best Animation, Best Music, Original Score) and was nominated for several more, including Best Picture. Download it for $9.99 in Standard Definition ($17.99 for the HD version) from the PS Store now.

Not up for the balls to wall, all out shooting on offer in Just Cause 2? Then the stealth shooting of the Hitman series might be more your thing. In this trilogy of some of the most classic and must-buy titles in all of PlayStation’s history, you get to assume the role of Agent 47, an assassin who will go to any means necessary to dispose of his target. Whether that means dressing up as a police officer or even as a clown, in the series’ typically tongue in cheek style or if that means garrotting an unsuspecting bystander as a distraction in the games’ more serious segments, the Hitman Trilogy HD is well worth your hard-earned pennies. Buy it from the PS Store now for $19.99 ($15.99 if you’re a PS Plus member).

The second and final of the movies on this list is also an Oscar winner. From esteemed director Christopher Nolan comes Inception, a tale of dreams and reality that will dizzy your brain as much as it amazes it. While the film is known for turning what you think you know about the film on its head, some incredible CGI involving changing up gravity and a few explosions too, Inception is the ultimate in twists and turns. Supported by an all star cast of Leonardo DiCaprio, Ellen Page and Joseph Gordon Levitt as well as the four Oscars it won (one of which was for Inception’s beautiful array of visual effects) and the film’s four other nominations, you’d be crazy not to buy it. Get it for $6.99 in Standard Definition ($11.99 in HD) from the PS Store now.

Last, but most certainly not least, is the Prince of Persia Classics Trilogy. A linear adventure tale about a Persian Prince, you wield swords and attempt to hack and slash your way through the demon hordes and beastly bosses who have taken over your kingdom. While some of the modern releases in the game’s franchise have paled in comparison to some of the earlier Prince of Persia titles, the original games provide incredibly satisfying combat and original gameplay ideas, one of those is in the form of the ‘Sands of Time’ which let you reverse time when you’ve gone wrong. And if you’re put off by the Prince of Persia movie, don’t be, because the film doesn’t do the franchise justice as the Prince of Persia Classics Trilogy offers some of the best platform gaming the industry has seen in years. You can download it for $15.99 ($8.00 for PS Plus members).

These are easily some of the best games and films available from the PlayStation Store so pick them up now before the offer ends on the 15th of July.

Is there a game you want that you’d love to see go on sale? Let us know in the comments below.