A long time ago, on a little big planet Sackboy wished he had many different costumes to wear and his desires have come true in such a way that even a 3D artist like 3dchris89 has created a 3D work dedicated to the most loved gaming character ever. Titled Rebel Pilot, Sackboy does not look cute or pretty like he always does, but looks more like a tron or bot from the Star Wars as was intended, in the 3D representation. The work was done in order to win a competition and the goal was to turn Sackboy into something very innovative. 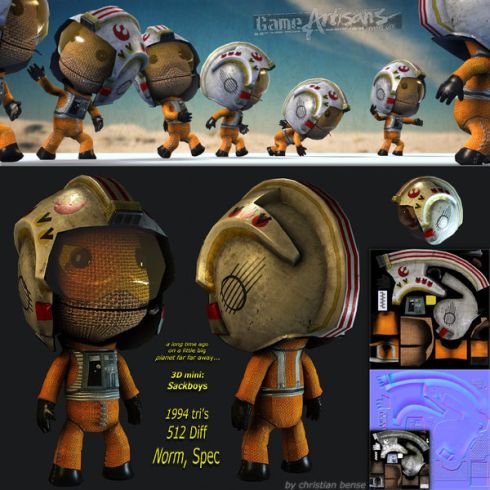 The goal certainly has been achieved with Sackboy looking amazingly different and robot-like. The modder decided to turn him into an X-Wing Pilot from the Star Wars and required about 5 days in all to create this cool 3D representation of X-Wing Pilot. The way his helmet has been designed is particularly praise worthy and it is not just one Sackboy in the 3D work but several mini-ones complementing each other.

One cannot but wonder why Sackboy is so versatile and can don any costume human mind can possibly think of. You could build a costume  too, on your desktop and all that you would need some coffee which you could gulp down with the help of Sackboy Cup Comforter. If suddenly morbid thoughts about Sackboy’s innards occur in your mind, don’t fret. Just go ahead and check out What Sackboy is Made Of. However, you might need some guts to check out lovable Sackboy’s innards.