Sony has been repeating non-stop for the last few months how there’s no successor for the PS3 in the near horizon, yet fans expect a new incarnation of the PlayStation every day now. For those who dare to dream, like Joe Dumary, Sony’s words hold no meaning at all. They want the future and they want it now! And if Sony is not gonna give them a new machine, they might as well develop their own. 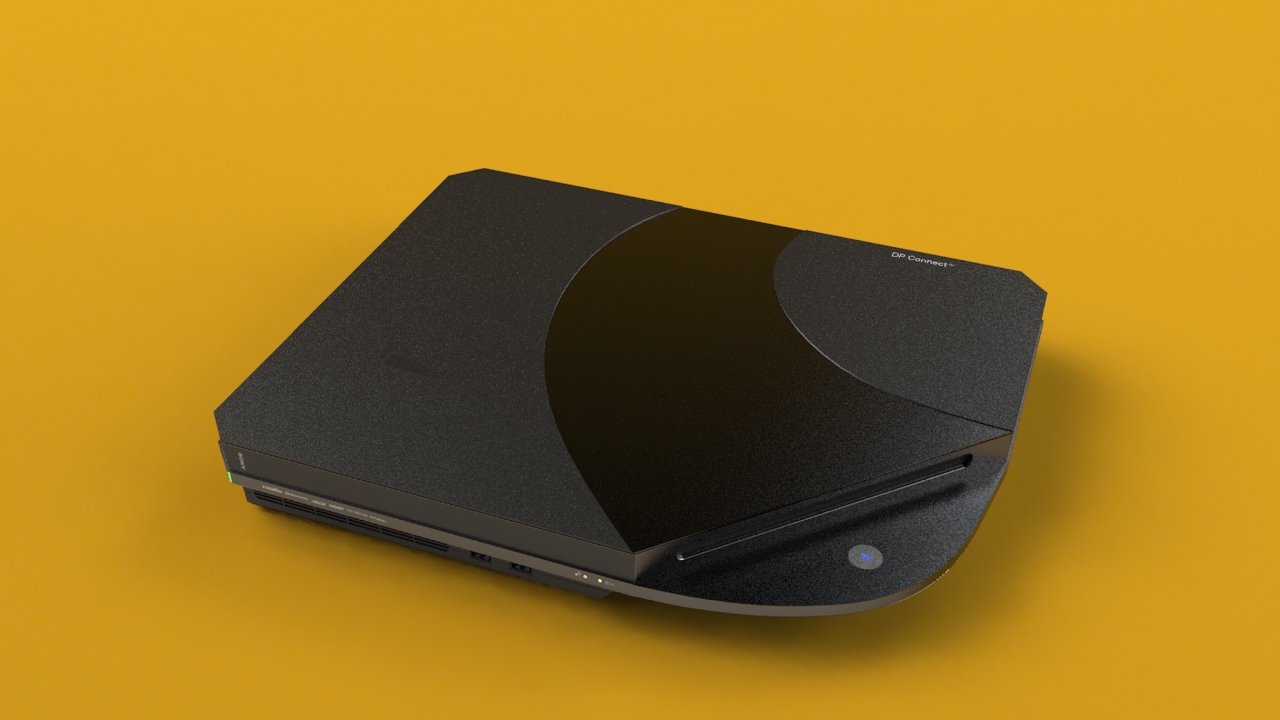 Introducing, the PS4 by Joe Dumary, aka, The First Smart Console in the world. The console, part of the PlayEco line, uses 0 watts in standby. With the “ECO Restart” function, the player may save their game and turn off the console… turn it on and resume the game without a load where they left off. 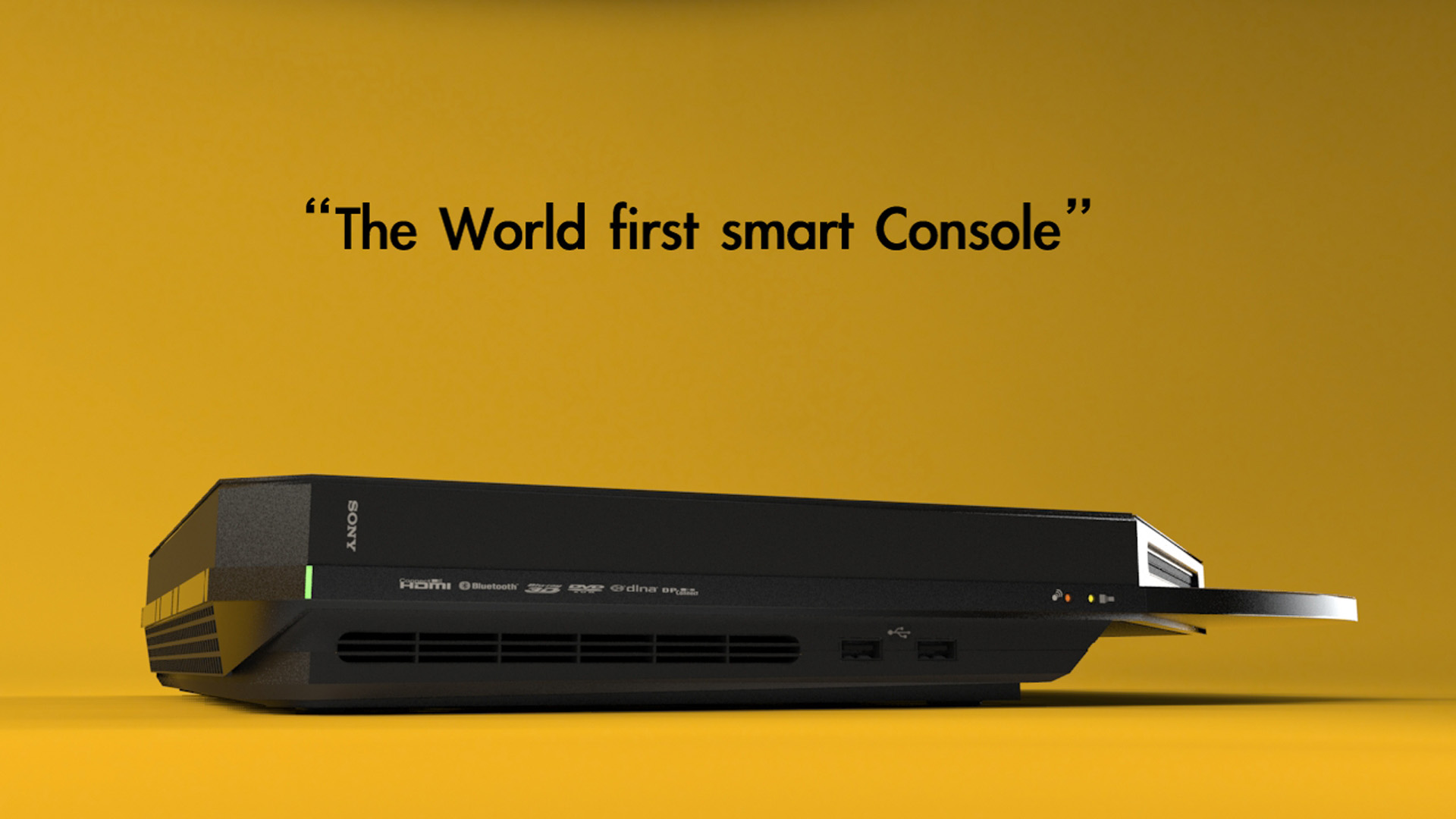 The console looks like a mixture between a PlayStation 2 Slim and a Memory Card, so it has a lot of retro appeal, while providing the best of the next generation at the same time. It is made of 60% recycled material, a magnesium alloy and carbon (25%), light, weighs only 2.1 KG, and consumes only 90 watts. Another note on power management, this machine is smart and after 30 minutes of play, draws on its reserves by automatically cutting the power for 5 minutes. So you play on Playr (playreserve) and restarts the flow after 5 minutes to save electricity. In case of a short-circuit, players do not lose their data … the PS4 will take over with playreserve and automatically save the game leaving the players up where they left off. 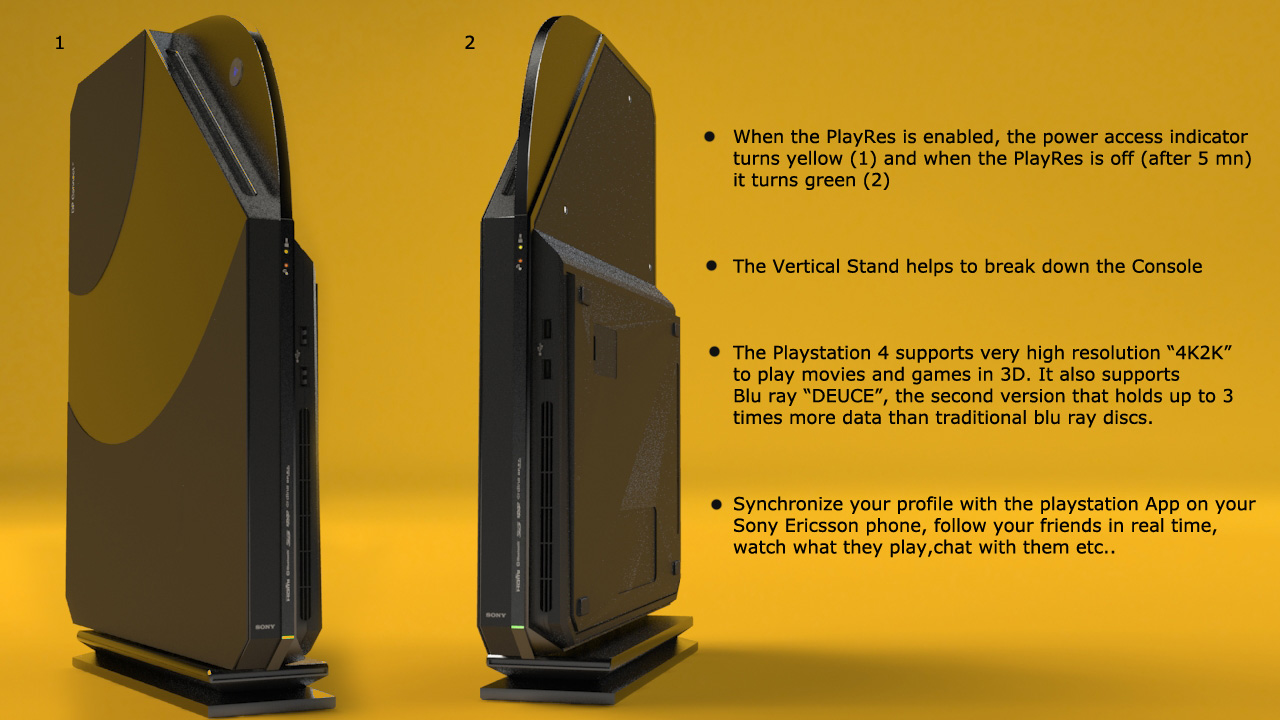 Compatibility with PS Vita allows players to use it as a remote control for browsing the Internet or play some games using the touch capabilities. Also, the PS4 is compatible with Sony tabs and all Sony devices, and capable multitasking. Users will be able to do several things at once like, say, pause the game, go to the PlayStation Community Gaming, watch videos on Youtube application and resume the game. 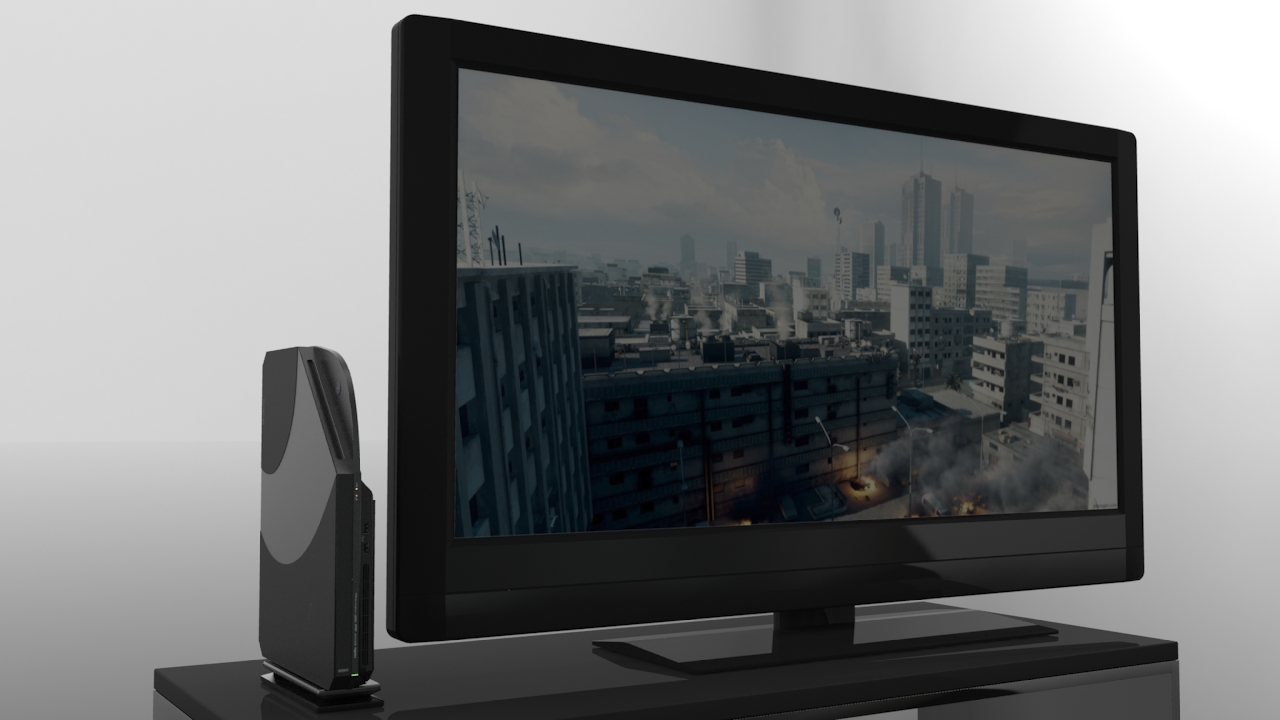 Also, you might be wondering what is Playstation Community-Gaming. In Dumary’s words, it’s “a portal dedicated to gamers, or you can chat (text or video) with other players, share your games, walkthroughs, or connect with players having the same game with the search function.” 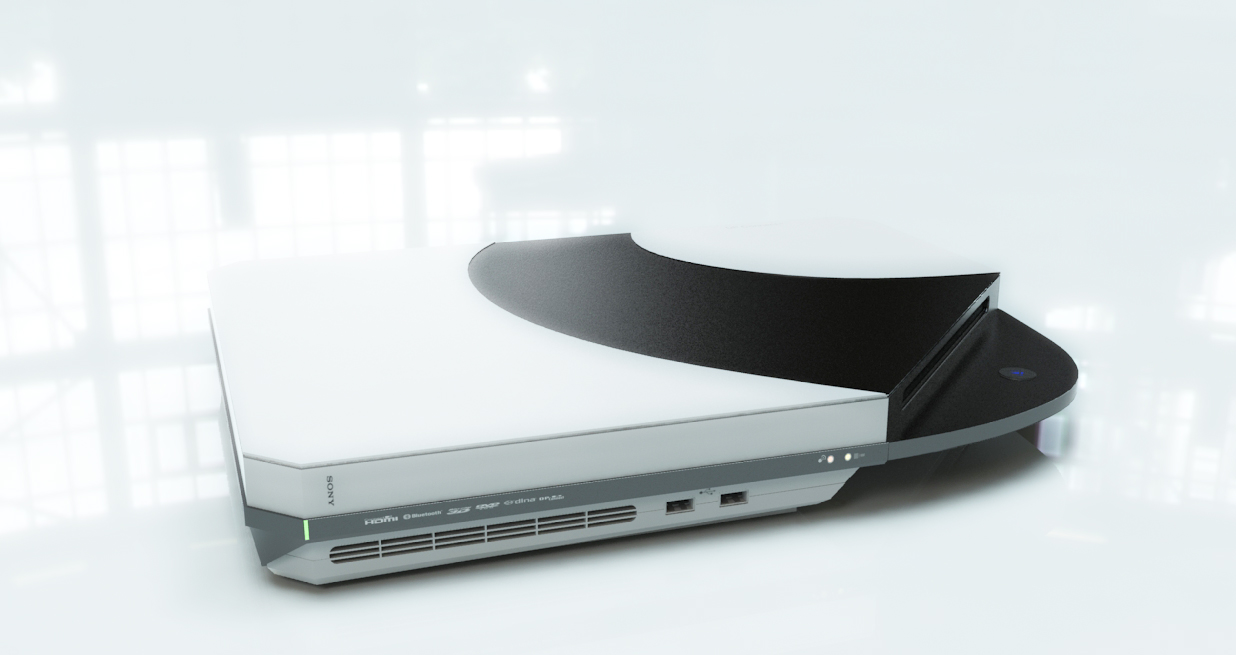 And now that we’ve covered the connectivity functions, we might as well talk about Dumary’s hardware: 1.5TB HDD, Full 3D 4K2K compatible, DLNA, DPhdmi (HDMI Connect), 3D Blu-ray (Blu Ray “DEUCE” Compatible: 3 times more data than the classic blu ray disc), USB 3.0, DPConnect Bravia Sync, Qriocity, Sony Ericsson sync, Cloud Saving, and live TV and applications.The PS4 also features DPHDMI (or HDMI Connect): If users do not have a compatible DPConnect TV’s, the DPHDMI allows to connect the console to your TV wirelessly. All audio systems are detected automatically, too. Excited yet? Combining this exciting hardware and connectivity options could lead to smarter games: some games support the “Open Reality”, which means they will reproduce the weather and time in real time. 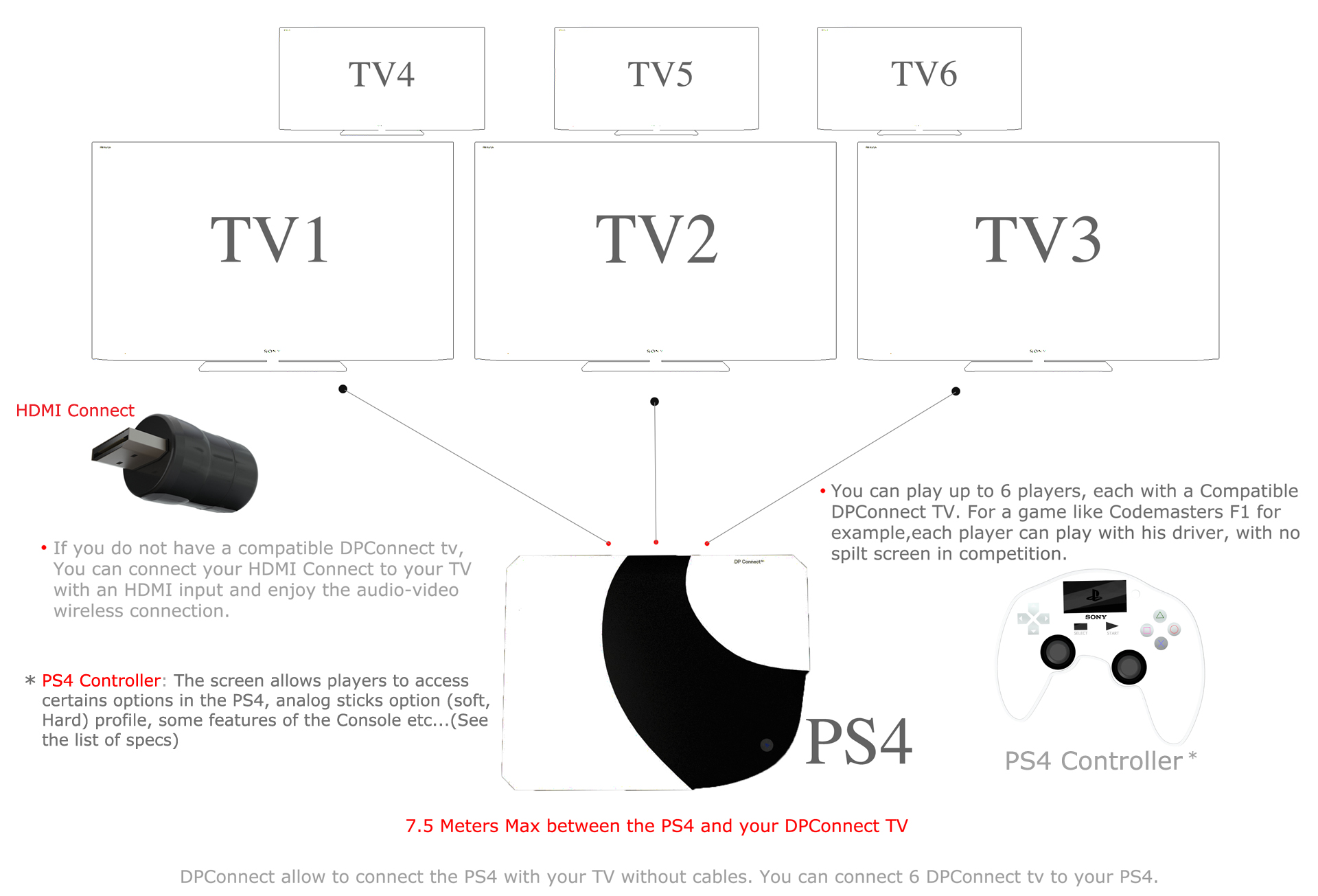 Thanks to DPConnect-Advanced the console connects wirelessly to compatible DPConnect TV’s. users do not need HDMI or other  audio-video cables, as the console will automatically detect TVs and select according to the resolution of the screen by default, all in less than 4ms. With DPConnect  Advanced, you could play with two (or six) players on two (or six) different TVs with the same console, so everyone could see his game without split screen (for some shows like E3, Tokyo Game, and so on, for example ). The distance between the console and the TV should be 7.5m maximum.

The controller has a light sensor (for screen luminosity), an option screen to adjust settings such as the rigidity of the analog sticks (the stick will be difficult to maneuver in some parts of certain games for total immersion), and the battery level. The screen allows players to access certain options such as battery management, and some option of the PS4 console (it allows for adjustments to the console without pause, for example). Controls charge via USB or inductive charging. One-touch power button, and all options appear. Dreamy, huh?