Ever since its launch the Ps3 has been well known for its incredible performance which was the the primary contributing factor in the success of the [email protected] project that allowed users to link up their Ps3’s via the internet to achieve supercomputer computability. Following in the success of the project the air force now plans to hook up 2000 PS3’s together(along with some other off-the-shelf components) to form one powerful but green supercomputer christened the 500TeraFLOPS Heterogeneous Cluster. 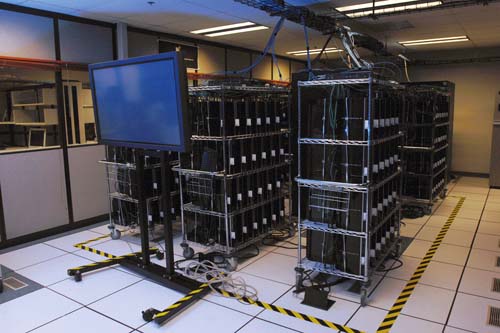 The research group undertaking this project has already been handed a $2 million grant to get started with; they plan to add another 1700 PS3’s to their stockpile of 366 PS3’s to create this monster capable of processing up to a 100,000 times faster that any present high end processor in the market. And what does one actually do with all this processing power? well the reach will be running applications like the Back Projection Synthetic Aperture Radar Imager formation, high definition video image processing, and Neuromorphic Computing, but wouldn’t playing Final Fantasy XIII on this thing be more fun?

But the highlight of this supercomputer is that it offers the same processing power while managing to retain a eco-friendly, cost effective nature. The supercomputer will use only 300kilowatts of electricity as compared to the usual 5megawatts of juice that normal supercomputers consume.

As this is a DOD program the supercomputer will a myriad of  uses but for now it must satisfy its-self with un classified information. All that’s left now it to come up with a cool gold plated PS3 mod for this super PS3.