The advantages of being counted as one of those tycoon who don’t worry about what they are buying but that have to be extra ordinary and if it is laded with Diamond and Gold made one, then there is no doubt and if they are real gamer then they would be real hungry to utilize their richness for fulfilling their crazy dreams like this one. 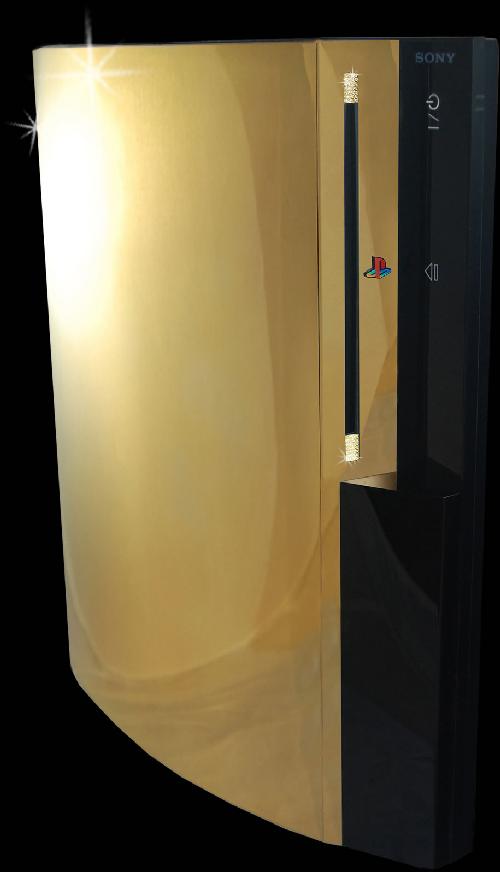 This is one filthy rich man who has crossed all boundaries of making a conventional PS3 and created this mind blasting sparkled “Gold Laden and Diamond studded Sony PS3-Supreme” which is one hell of a creation which I don’t think any one can imagine of having or even creating.  Stuart Hughes is the Midas by whose golden touch creates this uber cool gaming beauty which is just out of our imagination after his another supreme creation of Diamond studded and Gold made Nintendo Wii.

Not only imagination but even budget too because the whole outer section of this Play Station 3 has been made up of 1600 grams of solid 22ct gold and both the sides of the disk loading slot have been studded individually with 58 of 0.50 ct blinding diamonds which is in total sum ups to 26ct.

Taking twelve weeks of dedication, this is worth $320,000 ONLY and to maintain its uniqueness, only three such consoles will be available for sale in the world but I wouldn’t be surprised if these end up in an antique museum after a few decades because whatever you say, this is one hell of a killer creation coming straight away from king Solomon’s treasure chest and is really one of the most beautiful things I have ever seen.

I also advise you to see Sony PS3 Slim as great product, even you can see PS3 3D Game to play on those.