Is the PS3 Killing Children? 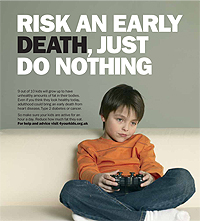 Is the PS3 so unhealthy for children that it is actually the cause of their future deaths? I used to think that violence in video game was for a riot, but based on a 4YourKids ad…the PS3 may be  a major cause.

This ad you can see in the image is speaking of unhealthy lifestyle, increased chances of cancer, diabetes, and heart disease. They explain that lack of activity and an unhealthy diet brings on this increase, but thanks to the Ad…the PS3 is to blame. Why the PS3? because I don’t see the kid presenting his lack of activity playing an Xbox 360. Well, at least they show a wireless controller, which probably increases the risk.

Is this some kind of propaganda? Why don’t they show kids playing WiiFit and just show the Dual Shock controller in the child’s hands. What do you think of it…is there any basis for such an ad?