A new shooter is making its way to PS3 consoles called Dust 514 and it’s going to be an MMO developed by the people behind EVE Online.

According to sources, the team behind Dust 514 is touting it to be the “biggest multiplayer FPS on the market” and will offer depth and scale that are unheard of.

While it sounds like they are feeding us the usual marketing line, one can hardly criticize the team for wanting to offer us something ambitious. They were, after all, the people who designed EVE Online, a space based MMO with a deep system of economics and markets. EVE has so much depth to it that some people play it full time manipulating its markets and making real money at the end of the day.

Dust 514 is going to be set in the same universe, not just in terms of characters and events, but will actually be connected with the current state of EVE Online. While EVE Online concentrates on what’s going on in space, Dust 514 will be the actions of players on the planets themselves. As such, the developers want decisions that players make in either game to slightly influence the events of the other.

For example, players could trigger events in Dust 514 that would impact related events in EVE Online and vice versa. How well this will work is something we will have to wait and see. Overall, I’m not entirely sure that people who have spent years perfecting their EVE Online markets will like the idea of some new console players affecting their livelihoods. 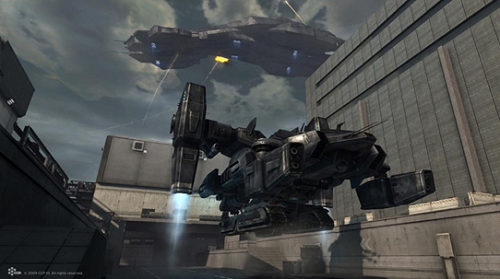 Like in EVE Online, microtransactions will play a large part in the game’s economy. Players will be able to buy tons of different weapons and gear and even sell them to other players all for real money. It looks like grinding away at a shooter could potentially pay off for a few people.

The BETA should be out at some point this year, before the holidays, with the release expected for Spring 2012.

In other news, Sony announces Odin Sphere and Grim Grimoire are coming to PS3 and be sure to check out 40 minutes of Silent Hill Downpour.