Made by deviantART user TRP-Chan, its the ultimate Wheatly puppet that really lights up and moves! 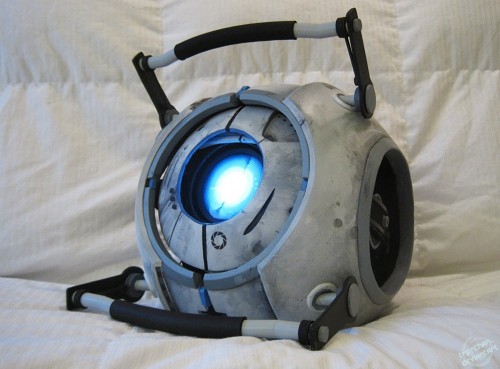 What makes Valve’s Portal 2 such a great game isn’t just great portal puzzles, but also its top-notch writing. Especially in one key component, that without, wouldn’t have given Portal 2 such a loving impressing with its fans — your robo-sidekick through much of the game, Wheatley.

At the onset of Portal 2, you are first introduced to the soccer ball sized A.I. who’s fast-talking needy antics bring much needed humor to the standard science-fiction romp. Wheatly is voiced by Stephen Merchant, a British comedian and one half the duo who created the popular BBC (and the soon after NBC version) comedy The Office.

The pairing of Merchant’s impressive voice talent and the all-to-delightful dialogue provided by the writers of Portal 2, has made Wheatly, over night, an instant popular character to the likes of gamers everywhere. And don’t take that likely, because take a look at deviantART member TRP-Chan’s kick-ass tribute to Wheatly —  a full working puppet that is almost roughly the same size of his in-game counterpart.

Such an amazing creation — which should come at no surprise that it’s from the same person who made an equally amazing Wolf O’Donnell from Star Fox costume a while back. In the case of Wheatly, according to TRP-Chan the process to create him took quite a lot of hard work and was a big learning experience for the talented artist. I for one don’t doubt them for one bit.

TRP-Chan plans on cosplaying as Portal 2 heroine Chell, bringing along Wheatly as a bound-to-their-side buddy — so be on a look out at a nerd-convention near you! Oh and also coming to a PlayStation 3 near you is the new system update v3.70. Just in time for Batman skins and the rest to check out on the PlayStation Network.

Image and video courtesy of TRP-Chan