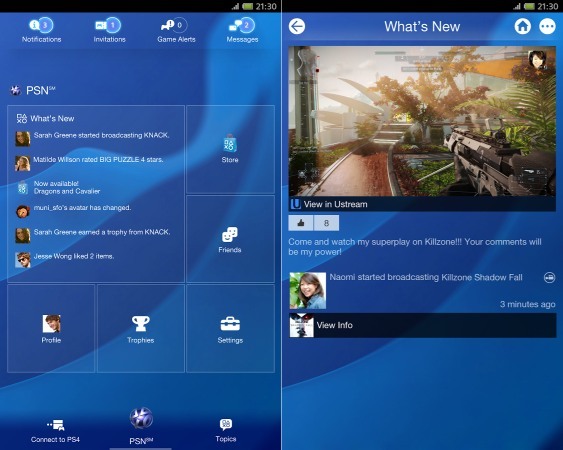 Out of all the best features about the PlayStation 4, being able to watch livestreams of fellow PS4 owners is so fine and dandy. And I’m wagering Sony agrees on this too, which is probably why the latest update for their PlayStation companion app just got a neat update that’s focused on finding such streams with better ease.

The PlayStation app’s What’s New section now lets users browse PS4 game streams directly from their iOS or Android device. Unfortunately, the only catch is that the app won’t allow you watch those streams from inside it. Instead, it off loads that function towards another app. So for instance, if you want to watch a friend’s stream on Twitch, then the PS app will redirect you towards your smartphone’s internet browser.

On Android though, if you have the Ustream app installed and happen to open one of their feeds on the What’s New section, then it quickly switches over to that. Sure it would be nice if the PS app would just handle all that on its own, but for now it gets the job done.

Lastly, one other fix Sony brought to this update was to an odd option that would automatically pull the PS4 out of sleep mode when using the PS app to check friend requests and the like. That’s no longer the case after this update. No more worries about wasted electricity, folks, Sony’s got it handled.

For more PlayStation news, the latest about the slimmed down version of the PS Vita hitting the UK next week, and when Final Fantasy XIV is coming to the PS4, keep watching Ps3 Maven.