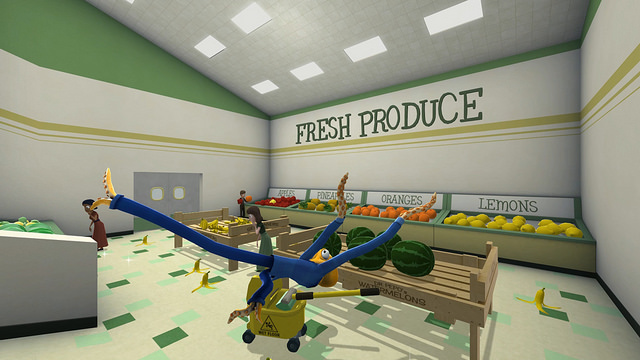 Howdy, once again folks! Time to catch up on this week’s releases for the PlayStation Network, and the spread this week is something else. Full of strange, new, and fascinating things from the sea to the stars.

From the murky depths there’s new stuff like Octodad: Dadliest Catch for the PlayStation 4, where you control an octopus trying to live his life out as a human. Yeah, really wild stuff. But if that’s too funky for your senses, then have some multiplayer fun driving cartoon racers in Cel Damage HD, a title that’s the cross-buy value of the week.

Over on the PlayStation 3, digital offerings like the tower defense game Defense Technica, and the free-to-play sword-fighting of Soulcalibur Lost Swords (based off the popular fighting game series from Namco Bandai), might be your fancy. The latter is free, so it’s bound to be worth a try.

Plus, don’t overlook what’s new on the PlayStation Vita either: Demon’s Gaze is the big Japanese role-playing game release for this week, with futuristic dog-fighter Starlight Inception, and the Vita debut of The Walking Dead: Season 2 — Episode 1 also being huge highlights.

A story of destruction, deception, and fatherhood. Control an octopus masquerading as a human, and help him go about his daily life in a constant struggle of coordination. Will his suspicious family uncover his dark, inky secret?

Grab the wheel of insane cartoon racers and compete in local multiplayer matches. Play single-player to practice, or fight up to three others split screen with more than 30 cartoony weapons like a TNT Sheep or Shrink Ray. Control 10 unique characters across 13 arenas. Three-way cross buy.

A revolution in tower defense. Defend the core and struggle against enemies on a changing battlefield where attack paths and weather shift in real time. Upgrade weapons and think quickly to execute the perfect counter attack.

Join the epic fighting experience for free with this single-player adventure. Choose a fighter and journey through a sweeping tale of souls and swords. Crush opponents with devastating attacks to uncover a wealth of hidden treasure along the way.

Prepare for adventure! Awaken in a land filled with mystery, danger, and treasure, and explore hair-raising dungeons in this old-school RPG. Command an eccentric party of heroes and use special attacks to decimate foes.

One hundred years from tomorrow, World War IV will erupt across the star system. Assume the role of a courageous fighter pilot and join the Allied Star Force of planet Earth. A first/third-person space combat game brimming with exploration and online multiplayer.

Continue the story of Clementine, a young girl orphaned by the undead apocalypse. Months after the events of The Walking Dead Season One, Clementine is still searching for safety. Help her survive in a world where every choice matters, and morals are painted with gray.