The same shoulder-length, tousled, wavy hair; the same black eye patch covering the right eye; the same black bandana which keeps the hair in place; the same M1911A1 to bump off enemies; and the same ‘don’t mess with me’ expression on the face. Hardcore gamers and Metal Gear Solid fans would instantly recognize this bad-ass as Naked Snake from Metal Gear Solid 3: Snake Eater (or as Big Boss from previous MGS versions).

We are talking about the new ‘Metal Gear Solid Normal Snake Vinyl Figure’ designed and marketed by Medicom, a Japanese toy manufacturer. If you are expecting an assembly line action figure that markets are usually flooded with, think again.

The Japanese are known for their eclectic pop culture and hair-raising obsessions.  It is no surprise then that the Naked Snake vinyl figure reflects some of the eccentricities and fine graphic art from the land of the rising sun. Metal Gear Solid 3…is set in a Soviet Union Rain forest. Naked Snake must survive the jungle and his enemies using stealth and camouflage techniques.

The vinyl figure comes in a camouflage suit used by its video game cousin. And it is in this camouflage suit that you can see glimpses of the fine graphic art that is a part of Japanese tradition. It is an all black-and grey-suit, which has detailed lines that give the suit a rugged military look. 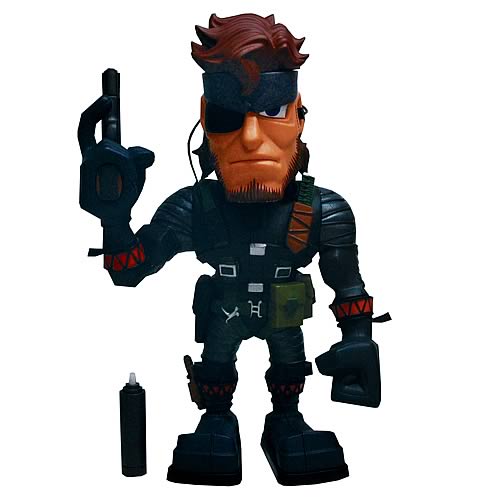 The suit is complemented by a black vest, which contains Snakes’ knife and radio; and a green-buckle, multipurpose pouch for ammo and the gun holster. The multipurpose pouch has shades of military green, black, and plastic white (for the buckle clips).

A brown knife sheath is tied down to the vest with black strings. Black earphones are plugged into the ears of the toy figure. These earphones are connected to the radio in the figure’s vest pocket.

We have talked about the fine graphic design of the ‘Metal Gear Solid Normal Snake Vinyl Figure’ and now it is time to talk about its ‘standout’ eccentricity.

The Naked Snake vinyl figure has huge, chunky, head hands and feet (compared to the rest of the body), that makes it adorable and deadly at the same time. Trust the Japanese to make even a mundane action figure interesting and eclectic.

If you are a fan of the MGS series and loved the digital jungle in its third installment, the Naked Snake Vinyl figure is a must have collectible. It is available at $79.99.

This must have surely caught your attention. You should also go through Kratos God of War Mighty Muggs Figure and Vinyl Figure of Kratos from God of War.