Logitech has unveiled the cool and functional Guitar Hero Guitar in Black. The premier edition which came in colour red was available in limited numbers and thus many could not lay their hands on this stylish Wireless Guitar Controller. 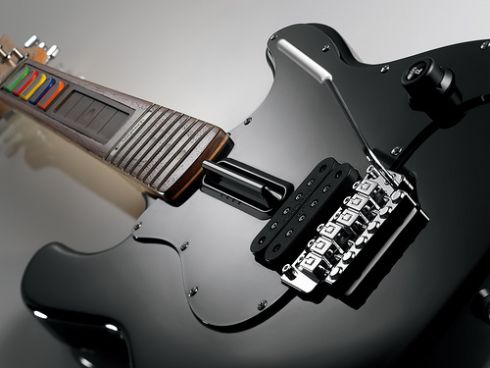 While the red one was launched way back in October, the Black version has just been launched and comes with several minor updates which were based on the feedback they got from the users of Red Guitar Hero Controller.

The black one feels great in hands, is ergonomically designed and one can strum easily. The strum bar is moreover quite and very responsive. The Guitar Hero game has created a lot of interest among the video game community to learn guitar and other musical instruments. It would be nice when real guitars can be used as controllers for video games, though it is a fanciful and unrealistic thought.

The Logitech Wireless Guitar Controller can be used with both PS3 and PS2. It would be launched in Europe in the beginning of June. There have been a number of other Guitar Hero controllers which we have featured earlier. You might want to try the Wireless Warbeast Guitar if you like the Sinister Warbeast.  If you like Aerosmith a lot, you could also try the Aerosmith Guitar Hero Controller.