Hulu Plus On PlayStation 3 — Now Available And Still Awesome

Ditch the cable box, and turn you PlayStation 3 into the ultimate video media accessing machine with the full release of Hulu Plus.

Perhaps the Disney/Pixar movie Wall-E wasn’t too far off with it’s future depiction of our human species. Severely obese people slouched upon a futuristic La-Z-Boy chair that provides every need and comfort to it’s occupant.

For a person, such as myself, who takes much pride and care in his current appearance, it’s a bit of a scary thought (only because I’m a weak-willed person and probably will be the first of many to hop on the futuristic La-Z-Boy chair craze.)

And while, sure, it’s just a cartoon movie and has little chance of ever becoming reality — sometimes I fear with all the media bells and whistles the PlayStation 3 has, that we might be on the cusp of fulling such a sluggish and heart-clogging prophecy.

Cast your eyes upon the next step in our human devolution (not really) — with the exciting full release of Hulu Plus available from the PlayStation Store right now. And by full release I mean no longer just for PlayStation Plus members, but now for every PlayStation 3 user for a $9.99 monthly subscription fee. 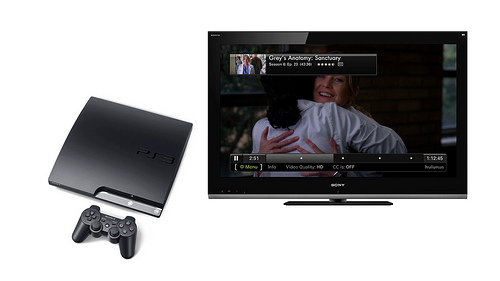 Hulu is one the largest and popular video media streaming sites on the web, and has a wide selection of current hit TV shows (Modern Family, 30 Rock, House M.D.) and movies from all the big name studios and networks that you can shake a stick at.

To sign up for Hulu Plus, once you’ve downloaded the app via the PlayStation store, you then go to this address: www.ps3.com/hulu, and then receive a referral code to enter back at your PlayStation 3 to gain access to all that beautiful video content to be streamed to your console in HD (720p).

For all your TV show and movie watching needs Hulu Plus is a pretty sweet deal, especially considering all the media content you get at a cheap price point of $9.99 a month. Not bad at all.

Could this be the rumored PlayStation Phone? Could this PlayStation Move Shooting Attachment be that more awesome? Why not click and find out!