There is something really funny about technology, and that is its transience. What is in vogue today becomes obsolete in a few weeks. With such impermanence looming around the corner, it should not be a surprise if we soon have to get rid of our bulky consoles that we happily use at home. 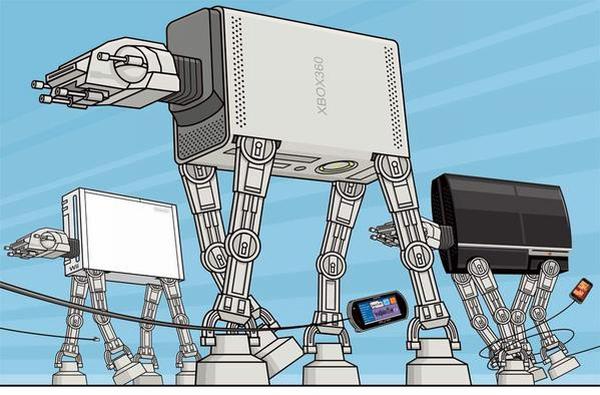 Yes, we are talking about our favorite console PS3 and its rivals like Xbox 360 and Wii which we use to play games lately. Nathan Daniel has created a beautiful and witty illustration for Stuff Magazine and seeks to discuss the growing influence of handheld gaming, Online gaming and the iPhone.

He also further seeks to discuss if these convenient gadgets would replace traditional home consoles. The illustration depicts a shiny black PS3, an Xbox, and Wii being chained and hauled by modern handhelds just like the mammoths were reined in by the hunters. Just like the woolly mammoths, our favorite consoles may soon become extinct right in front of our eyes too.

These modern consoles which we have grown to love may become the Dodos and Mammoths of yesterday and soon become part of an even more ancient Jurassic era. Nathan humorously thus has drawn an excellent sketch which would make us stop playing games on the console for a while and think how long it might be to see the day when we would visit museums to stare at antique PS3s and other antique consoles.