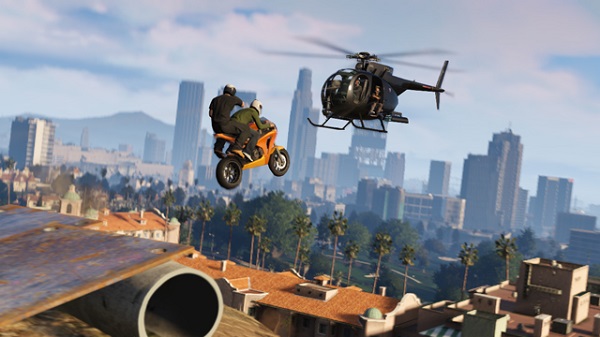 In the world of Grand Theft Auto, where red lights are just a helpful suggestion, bombastic equals better and just about anything (legal or otherwise) goes, the process behind each game’s development is something of an expensive mystery. Rockstar Games, the team behind the massively successful crime sandbox series, have always been extremely secretive about how they do what they do, and in truth, other than reveals of just how much each GTA title costs to make (GTA IV and recent title, GTA 5 are both said to have cost over $100 million to develop), we know very little about how the games come to be. With Grand Theft Auto 5, and its ambitious GTA Online multiplayer mode, the mystery remains high, but now, thanks to an update, we will at least get to try mission building for ourselves.

One of the highlights of GTA Online is the mode’s virtual death defying races, involving swinging your car around corners much like a video game character with a respawn button, which, incidentally, is exactly what you play as. The release of the “Deathmatch and Race Creators Beta” lets you set these up for yourself, with Rockstar explaining that you’ll have “access to some of the same tools as our own game design and development team, you can craft your own custom blood-soaked gunfights, high-octane street races, screaming jet dogfights and more”, they also state that you’ll be able to share these races via the Rockstar Games Social Club feature, giving your fellow players a chance to download, play and rate your created Deathmatch, Team Deathmatch, Race, GTA Race or Rally Race levels. Not only this, but the best of the community created crop will be distinguished as a “Rockstar Verified Jobs”, which will then be shared with the GTA Online, giving the person who crafted it the chance to receive even more praise from other players.

In terms of Rockstar created content, however, they’ve now finished creating the ‘Capture’ game type, which is GTA Online’s version of capture the flag, albeit with contraband, trucks, buses and various other things to steal from enemy bases in another December update (the release date has yet to be announced). Too, Rockstar say that we can expect a DLC update for GTA 5’s story mode at some point in 2014, but little information is known about that yet.