At a “Dissidia Duodecim: Final Fantasy” tournament held last May the 21st by Square Enix in Japan, the attendants were presented with an advance of “Final Fantasy Type-0” live gameplay. 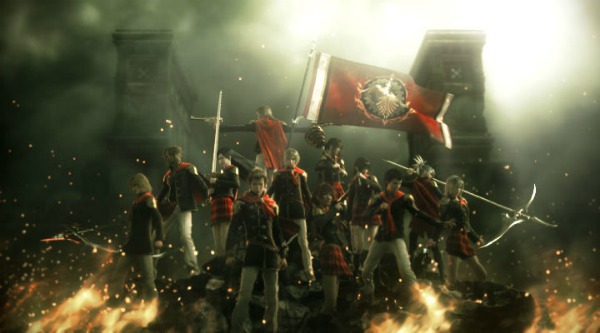 “Final Fantasy Type-0” (or “Reishiki”) is part of the Fabula Nova Crystallis (Latin for “New Tale of the Crystals”) mythology, as are “Final Fantasy XIII” and “Final Fantasy Versus XIII”. Though the three games share the same “Universe”, the stories take place in different time-periods and have nothing to do with each other.

This means we’ll be able to play Type-0 without having played the other two. We’ll have to wait until summer, though.

The events take place in a world called Orience, in which there are four nations: Milites, Anaze, Kogai and Rubrum, each bearing emblems based on the Four Symbols of Chinese mythology (the White Tiger, the Blue Dragon, the Green Turtle and the Red Pheonix). War breaks out when Cid Aulstyne, leader of Milites, refuses to abide to the Pax Codex (“Peace Treaty”) and sends the l’Cie military to invade the other countries. Having conquered Anaze and Kogai and taken their crystals, the Milites set their aim on the Suzaku Fiefdom of Rubrum. For reasons unknown, the crystal that was keeping the invading armies at bay suddenly shatters, leaving the nation no choice but to surrender. However, a group of twelve students from Class Zero, whom still posses the power of the crystal, are not willing to let their country fall and Milites have its way so easily.

That’s when we take control of these twelve characters in an action RPG style that features co-op multiplayer in a way that has been deemed “unique”.

The following clips show the mentioned gameplay demonstration as it was transmitted online on Nico Nico Douga. We can see an introduction to the basics of the game, the landscape of Rubrum, the dynamics of battles, multiplayer battles and missions, and also, the airship’s flight.

After seeing this, I know I’m getting my hands on this game as soon as it comes out.