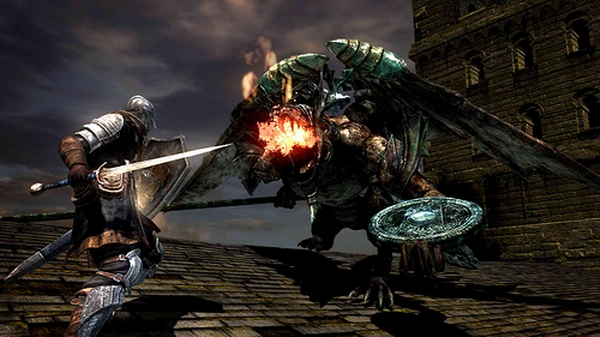 Dark Souls, released earlier this month in Japan, will be making its way to store shelves world wide early October. The title is the spiritual successor to 2009’s critically acclaimed Demon Souls.

The trailer makes the game look as enticing as ever. The game world looks outstanding, the character models sharp and dangerous and the dark fantasy setting from Demon Souls looks like it will be in full return, though now slightly more menacing (is that even possible?)

Namco Bandai has teased that the game will be “signficantly harder” than Demon Souls, which will undoubtedly be a turn-off for gamers who couldn’t handle the predecessor’s outrageous difficulty level. For the rest of us, it looks like it will be a time for rejoicing, and nostalgia for the days when video games were actually challenging.

Most likely this title will find the same crowd of followers than the first, though maybe with a few new converts thanks to some minor tweaks that will make the game play more forgiving this time around. Namco Bandai has revealed that players will not necessarily be forced to restart their current stage with each death. However, with concessions like this, that just means that players will have to play even more intelligently than before.

Dark Souls will be released for the rest of us on October 4th 2011.

In other news, check out the new Max Payne 3 trailer in fill Pop-Up video style and Castlevania: Harmony of Despair Coming to PSN.