There was a time in which men could become Gods. Soaring the sky through wind and fire, against enemies and chance, their own weapons and armor, and their own bodies even.

Taking off from an aircraft carrier in the Pacific or an airbase high on the Alps; flying in formation with your teammates as you watch their backs and they watch yours; keeping a constant check on height, course, flaps and engine; ascending beyond the clouds to gain that priced gravitational potential energy, and unleash it all in a furious descent, blood filling brains as pressure rises, and get behind your adversary to shoot his existence out of the sky. Ah, those were the days.

Luckily, Konami has joined hands with experienced-on-the-matter Gaijin Entertainment, creators of the acclaimed “IL-Sturmovik: Birds of Prey”, to bring those days back to us once more on PS3 and XBOX 360. 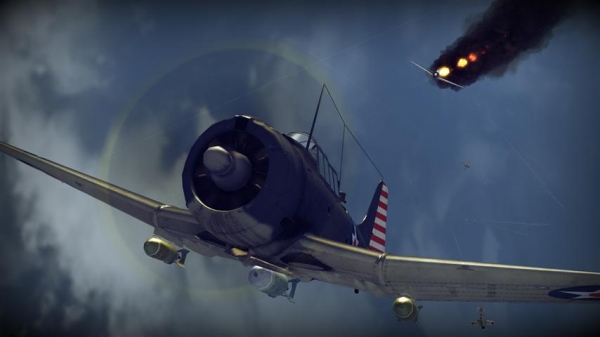 Set on World War II, the game will allow us to pilot over 100 models of fighters and bombers through 20 missions, choosing our side as Axis Powers and the Allies, take part of historical campaigns (like the attack on Pearl Harbour and the Battle of Midway), cooperative against AI and free deathmatch-like dogfights to be multi-played, choosing between a more arcade-ish control of our planes or absolute control of everything we see on our panels (these WWII beuaties were fragile: miss to rise the flaps when you’re speeding and you’ll be left without wings!).

“For far too long, first-person shooter fans have been tied to the foot soldier point of view, but we aim to bring the seat-of-their-pants skill and daring of dogfighting and aerial combat to a wider audience,” Konami Digital Entertainment’s Martin Schneider has stated. I wonder if we’ll be able to incarnate charismatic characters whose stories take us to the skies.

Anyway, here it is, what we’re eager to see: the official trailer!

You did it again, Konami: I can’t wait to play one of your games.

Check out another WWII set game like R.U.S.E., the Art of Deception, or other military action games like Call Of Duty: Modern Warfare 2 or MAG: Massive Action Game.