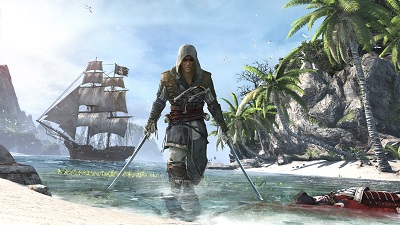 On Thursday (the 28th of March), Ubisoft, the developer and publisher of the Assassin’s Creed games released the the official Assassin’s Creed 4 : Black Flag packshots, giving fans a look at what the game will look like on shelves and today Ubisoft are finally releasing info about what the game will look like when it’s fired up in your fancy games machines, whose pretty face we’ll be looking at and just exactly which historical setting our eyes will be privy to when the game launches.

What some beady eyed readers will perhaps have already known (from Ubisoft information leaks over the past two days) is that Assassin’s Creed 4 : Black Flag will see players take control of a brand new assassin called Edward Kenway. Assassin by title but pirate by trade (he was a pirate trained by the Assassin Brotherhood), Edward Kenway is a fierce and mysterious sea-faring character who is feared by everyone, including the notorious pirate Blackbeard (as you can see in the AC4 trailer embedded below). Edward Kenway also happens to be the grandfather of one Connor Kenway, the protagonist of Assassin’s Creed 3.

In an official press release from Ubisoft, they’ve confirmed the Assassin’s Creed 4 : Black Flag setting as “the dawn of the 18th Century” a time that sees players taking on a “journey throughout the West Indies during a turbulent and violent period of time later to become known as the Golden Age of Pirates”. And we’ll get to see a lot of places from the famed era in history as Ubisoft promise that the game “features a vast open world with more than 50 navigable locations”, all, no doubt, will be historically accurate as they always are in the Assassin’s Creed games.

Ubisoft also say that Assassin’s Creed 4 : Black Flag will be available on PC, Xbox 360, PS3, PS4 and, most interestingly, “other next generation consoles”, which is a confirmation that the game will be available on whichever (yet) unannounced next-gen console Microsoft is working on.

You might also like to read Uncharted 3 Multiplayer Goes Free To Play and The Playstation 4 Is A Reality And Coming In 2013.