What is PS4 PlayRoom and Why is it One of the PS4’s Best?

PS4 had a great time at annual gaming convention E3, but one of the best titles we saw on the console wasn’t a game at all, but was a tech demo called PlayRoom. 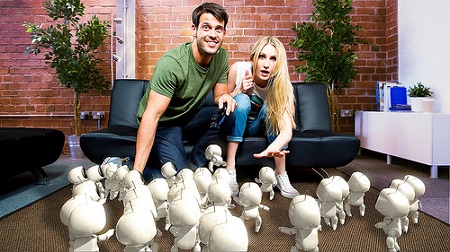 E3, the gaming convention that takes place every year in Los Angeles, California, was a huge win for Sony, who, showcasing the look of the PS4 hardware for the first time, won over the media, avid fans and critical consumers alike with some of the best games we’ve seen announced for next-gen so far. Many declared that Sony triumphed over Microsoft’s next-gen offering, the Xbox One, all because of the fantastic pieces of software that the PS4 was running. One of these in particular was ‘PS4 Playroom’, which, effectively being a tech demo to showcase the hardware’s capabilities, could now be making the upgrade to ‘actual PS4 game’.

The footage shown (which you can see below in trailer form) presents many of the different ways in which you can control and interact with PS4 games outside of the analogue sticks, face buttons and D-Pad set-up that we’ve been used to. New PS4 games will utilise both the touchpad on the new DualShock controller as well as the all important lightbar, which not only changes colour, but is also monitored by the PS Eye camera too, meaning that it knows when the light is visible or not. The PS Eye/DualShock lightbar interaction is similar to that of the Move controller which also employs a similar light system (each one has a glowing plastic orb on the top.) Also, controlling via smartphone was also seen, meaning that cross platform functionality is a major point on Sony’s to-do list.

With the tiny little creatures in the trailer proving so popular, Sony have been urged to develop the PS4 PlayRoom tech demo into a real game, and surprisingly, having listened to fans, Sony are actually going to consider doing it. Saying that “Sony’s R&D teams for hardware and [their] software teams worked to put [similar PS Vita tech demo, Welcome Park] together. It was a very similar situation for [PS4 PlayRoom].”, SCEA senior producer Tsubasa Inaba has certainly suggested the idea that they are more than capable to put the manpower into making this a fully fledged title.

As one big issue about next-generation gaming has been, ‘not to make games like those of the current generation, but bigger and better looking’ and instead to offer new player experiences, this could gain some seriously popularity should it come to fruition. Not only this, but it also paves the way for future, more original PS4 games with new control schemes, as it will help conjure up interest in alternative controls, enough for them to be real features in other PS4 titles, which is always a win for gamers.

Inaba also said that Sony would “hope to have a more definitive answer to [the question of PlayRoom’s future] in the next month or two”, so we’ll keep you posted should PS4 PlayRoom officially be made a game.

Read more on ps3maven, Will the PS4 Beat the Xbox One?, These Are The Confirmed PS4 Games So Far… Time To Get Excited