It pays to discover. Really, it does. Take a look at what we found listed on Amazon; a very interesting (and exciting) PlayStation 3 bundle featuring an assortment of goodies from a super popular Disney and Pixar series.

Forget about that Toy Story 3 PlayStation 2 bundle that was announced days ago on the PlayStation Blog, that is so old news my friends. (Although if you need a PlayStation 2 fix, it’s a mighty good deal that also includes Toy Story 3: The Video Game for $99 dollars.)

Look above at what Sony has not-so-well hidden in it’s back pocket: a Disney and Pixar’s Toy Story 3 Sony PlayStation 3 Bundle, and boy-o-boy is it packed to the brim with some really sweet bonus pack-ins.

“To infinity and beyond” indeed — not only do you get a 250GB Sony PlayStation 3 and Toy Story 3: The Video Game, from Disney Interactive Studios and Avalanche Software, but you also get two – count them – two Toy Story movies. The original Toy Story (1995) and Toy Story 2 (1999). 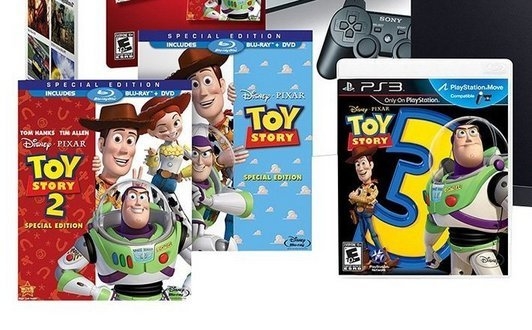 Both Disney and Pixar’s Toy Story and Toy Story 2 are the special edition versions, bonus material and all, that include both Blu-ray and DVD copies of the movie. (That is so very awesome I could hug tight my Pluto plushy, and probably will.)

Now, if “the price is right” on that Amazon.com listing, $349.99 dollars, then it’s a pretty amazing deal that kinda puts the above mentioned Toy Story 3 PlayStation 2 bundle to deep shame.

Currently this “toy box” only has a listed date of November 7th on the Amazon website, and to my current knowledge has yet to be announced by Sony. I can’t even find word of it on any other retailer besides Amazon.

Hopefully a statement from the PlayStation Blog will be issued soon enough, because it seems rather peculiar for them to not toot their own gold diamond encrusted horns on something this fantastic of a deal.

While you wait, why don’t you check out this video of  a Little Big Planet 2 beta user recreating the game Flower, or this elegant looking surround sound system for the PlayStation 3.