Valentines Day 2012 makes way for more than cheap roses & bad chocolates with EA Sports’ SSX out on the same day in North America. 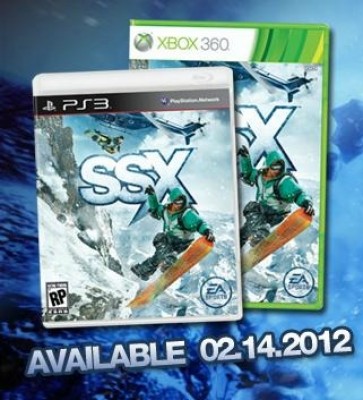 Snow shredding and big-air catching on top of some of the world’s proudest peaks; that’s what EA Sport’s long-running SSX series has always exemplifies, and while that didn’t seem so at first glance (here’s a refresher just in case you forgot,) the 2012 edition of the franchise is set to continue that fine tradition on it’s first PlayStation 3 outing (Xbox 360 too).

Which thanks from new info from EA, we’ve now come to know is on February 14, 2012 (Valentines Day!) in North America. Notably, that isn’t the January 2012 target release the SSX team were shooting for, but hey, better late than never! That should be around the same time when the Winter season hits the U.S. like a speeding 16-wheeler, so the timing is gold, Jerry. Gold.

You know what else is gold? … Or should I say cold? (Oh yeah, I went there.) The latest trailer from the game that awesomely shows off one of SSX’s newest mechanical features, wingsuits. And impressively, the ability to switch between snowboarding off a jump, taking flight, and landing without so much a hitch to race down the rest of the slope. Just imagine the trick possibilities! Yes!!!

The PlayStation Vita now has a release date too, by the way! Direct your Internet browser of choice to here to find out all the details about Sony’s next gaming portable releasing in North America.