Flight games are engaging but it is difficult to find the right controller to play those games. The Saitek Aviator seems to be a great choice if you were looking for something sturdy and efficient. It works not only as a PS3 controller but also on PC. 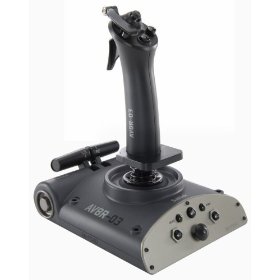 Accuracy and complete control are something that you can take for granted when you use the Saitek Aviator. What I really like about the controller is the 3 buttons, heavy duty trigger and POV analog stick which allow you to heighten realism and experiencing gameplay like never before.

The Dual mode switch allows you to change the control layout in order to suit various flight and fighting games. If you were worried about the controller’s ability to balance itself during intense gameplays, the large and flat base provides stability, support and balance. You could use it with USB and some of the games that work really well with the controller are Tom Clancy: HAWX, Blazing Angels and Blazing Angels 2.

Apart from the 3 buttons on the head of the stick, the controller also comes with 8 buttons on the base of the stick which allows the player to make any maneuver possible. This could perhaps provide the intuitive control method we have al been waiting for. The Saitek PS40U costs $46. If you were looking for other joysticks, do check out the XCM Rumble PS3 Joystick which looks pretty cool.